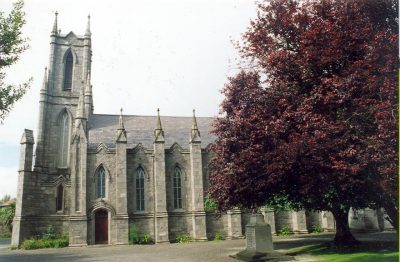 On 23 January 1860, the great-great-great grandparents of Meghan Markle, Duchess of Sussex, married in the Church of Ireland parish of St Mary’s in Donnybrook, Dublin.

According to the parish’s marriage registry, that day Thomas Bird, son of James Bird, a labourer, and Mary McCague, daughter of Francis McCague, a farmer, were joined in matrimony.

Thomas Bird was a private in the 22nd (Cheshire) Regiment, based at Beggar’s Bush Barracks in the Dublin parish, and Mary McCague, then residing at Merrion Strand, also belonged to the same parish.

The entry for 159 years ago even includes some contemporary smudges where the book may have been closed before the ink had time to dry.

Thomas Bird signed the document with an ‘x’ – ‘his mark’ – indicating he could not read or write.

Within six months, his company, the 22nd Regiment, was sent to Malta in June 1860 and the couple left Ireland from Queenstown (now Cork) on board the steam ship Olympus, having caught the train from Kingstown (now Dún Laoghaire).

Record of the marriage of the great-great-great grandparents of Meghan Markle, Duchess of Sussex, on 23 January 1860 in St Mary’s in Donnybrook, Dublin. Courtesy: United Dioceses of Dublin and Glendalough.

The research on the ancestry of the Duchess of Sussex was carried out by Fiona Fitzsimons and Helen Moss of Eneclann, the genealogical research company.

“Our research for the Duchess of Sussex started when we discovered the 1860 civil marriage certificate of Thomas Bird and Mary McCague, Meghan Markle’s great-great-great grandparents. It was known that Thomas Bird was in the army, but no-one had thought to examine whether he might have served and married his Irish wife in Ireland. With this as our starting point we were able to follow Meghan Markle’s family to Malta and then to Fredericton, New Brunswick, in Canada,” the researchers said.

Thomas and Mary Bird had at least two children named Mary and Harriet. Mary is the great-great-grandmother of Meghan Markle.

When Prince Harry and Meghan Markle visited Ireland last July, one of the venues on their itinerary was EPIC, the Irish Emigration Museum, which tells the story of the millions of Irish people who emigrated across the world.

The museum opened in 2016. Through a host of interactive exhibitions and galleries set in the brick vaults of the chq Building on Custom House Quay, it shows how those who left influenced and shaped the world.