“The atmosphere is amazing and the crowd are fantastic,” the Missionaries of the Sacred Heart’s youth group has reported in a message home.

Another young person stated it was their first in Medjugorje and that they “love this place.. climbed the mountain and that was exciting… I really loved the night in Medjugorje for some quite time with outdoor adoration.”

Two friends, Mato Topic and Matej from Cepin, a town close to Osijek in Croatia, cycled to Medjugorje – a journey of more than 800 kilometres in eight days.

“I was here also last year for the Youth Festival. I was mostly impressed by the spirit of prayer, so many young people at one place and love for the Lord that unites us all, regardless of where we came from,” Mato said.

He is to enter the Franciscan noviciate in September. He said playing football was the most important thing in his life but he felt an emptiness inside. Then he experienced a change after a prayer meeting.

“The Lord touched me,” he explained.

The Medjugorje Youth Festival is celebrating its 25th anniversary and involves up to 40,000 young people from more than 60 countries from around the world annually.

This year the theme is: “Behold, your Mother”.

The official beginning of the Festival was Thursday, 31 July at the White Dome.

There Fr Dragan Bolcic led the Rosary and the opening Holy Mass was celebrated by the Provincial of Herzegovina Franciscan Province, Fr Miljenko Steko, with 335 priests con-celebrating. 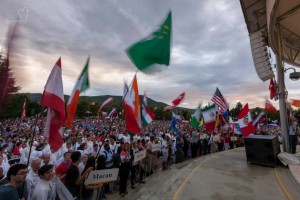 At the beginning of the celebration, young people from Medjugorje parish welcomed everyone to their parish.

Representatives from each country were then introduced.

Fr Miljenko Steko said in his homily that Medjugorje is a place of graces that draws people to Mother’s embrace.

“She loves us, she returns us to our basic need that restores our peace, love to God and love to men. Step out of the virtual world and touch first your fellow brother that you have rejected and despised, that you cannot stand and wish him all but goodness! Touch him with your purified gaze.”

He urged people to forgive and partake in the sacrament of confession at the festival. He said that God did not promise that there will not be suffering but that God does not abandon people.

“People, sadly, can abandon God and in that way condemn themselves. God does not give up on men and always gives them opportunity to convert,” he concluded. 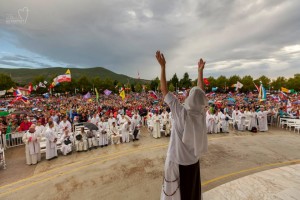 The evening programme begins with the Rosary and is followed by Mass.

This is usually followed with a holy hour of adoration of the blessed sacrament.

During the later evening there is another event or performance at the youth festival.

The International Choir and Orchestra, which enhances all the moments of prayer, involves young people from 20 countries.

The Festival finishes on Wednesday, 6 August with Holy Mass on top of Cross Mountain at 5am.

The programme is broadcasted live by radio station ‘Mir’ Medjugorje and many other radio stations, internet portals and TV stations. The Youth Festival is simultaneously translated in 17 languages.