Home > Featured > Mediterranean is a marine grave for many says President 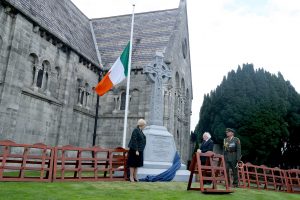 The Irish Famine experience offers lessons in light of the current refugee crisis and the displacement of the largest number of people since World War II, President Michael D. Higgins said at the National Famine Commemoration in Glasnevin Cemetery on Sunday (11 September 2016).

He posed the question about what lessons can be learned “as the Mediterranean becomes, for many, a marine grave, as European nations fail to respond to their humanitarian obligations?”

The President said some of the rhetoric invoked today is similar to that of the Famine times when some concluded that giving relief to the Irish people starving to death would represent a “moral hazard’.

Over one million Irish people died in the Famine and double that fled the country.

President Higgins went on to say that we now have the capacity to anticipate the threat of famine, and to take measures to avoid it.

“Yet we allow nearly a billion people across our world to live in conditions of extreme but avoidable hunger,” he said.

“The moral principle – the moral challenge of our humanity- remains the same: should we adjust our populations to an abstracted economic ideology, or should we, rather, use the best of our reason to craft economic and social models that can anticipate the needs and care for the peoples who share this fragile planet?” 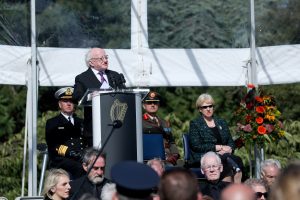 He said the Irish Famine reminds him of his recent visit to a famine-stricken Somalia.

“The sheer numbers dying in terrible conditions meant that the usual cultural rituals of the passing of life had to be abandoned.”

“Thus it was not only a people that was losing its members, but a culture being quenched. This is an experience Somalia shared in the 20th century with the Ireland of the 19th century,” he said.

“As we pray for the souls of all of those lost to famine, and in particular those lost in our own Great Famine, we must pray, too, that we not be condemned to repeat the mistakes of the past as we deal with the challenges of feeding the hungry in our own times,” he added. 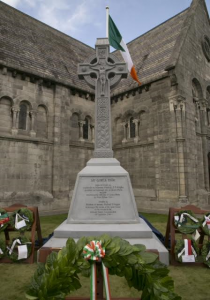 He was accompanied by Arts Minister Heather Humphreys, and unveiled the Famine Cross as a memorial to those who perished during the years of, what she referred to as, An Gorta Mór (the great hunger).

The formal State ceremony included military honours and a wreath laying ceremony by Ambassadors to Ireland in remembrance of all those who suffered or died during the Famine.

There was music from local choirs and St James’s Brass and Reed Band, Ireland’s oldest band.

Minister Humphreys said, “Records from Glasnevin Cemetery show that at the height of the Famine, 50-60 funerals were taking place here daily. People from the four provinces of Ireland, those from Dublin and those who made their way there in search of reprieve, are buried throughout Glasnevin Cemetery, making it one of Ireland’s largest Famine burial grounds.”

The Famine Cross will stand in Glasnevin as a permanent memorial to the Famine victims. It is a mid-19th century hand-sculpted Celtic cross donated by Glasnevin Trust. The sculptor is unknown.

The die stone and base, which like the cross are sculpted from Blue Kilkenny limestone, were hand crafted by McKeon Stone, Stradbally, Co Laois. The hand-cut inscription was executed by Aileen Ann Brannigan.