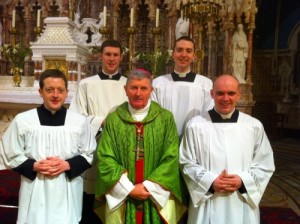 Rev Noel Weir on the left with Bishop Michael Smith of Meath.

The Diocese of Meath will get a boost to its priestly numbers this week when a former mechanic is ordained to the priesthood.

Thirty-nine-year-old Co Offaly native Noel Weir, who will be ordained to the priesthood next Sunday (6 December), said he “always dreamed of becoming a priest since primary school” even though his career took “a very different path”.

Speaking to the Offaly Independent he said, “I did my Leaving Cert in Tullamore College and I trained to become a motor mechanic and did that for about eight years. I then travelled to America and Australia for a few years. When I came back I did further study and worked in Intel in Co Kildare before later turning to the priesthood.”

However, he says his work as a mechanic has helped him in his priestly formation.

“I think it can help to get life experiences. It has definitely helped me. There are guys that started in the seminary straight from school and there are guys that are of a more advanced age. I am somewhere in the middle and that seems to be the case for the majority of seminarians.”

He believes that the skills he acquired as a mechanic have not gone to waste and he still maintains a strong interest in cars and engines. “I still service my car, or if something happens I will try and fix it within reason.”

Rev Weir was ordained as a Deacon six months ago, and has been based in Navan, Co Meath.

His ordination Mass will take place in the Church of the Assumption in Tullamore in Co Offaly and will be celebrated by Bishop Michael Smith of Meath.

His ordination is the third for the Diocese of Meath to take place in the Church of the Assumption in Tullamore. The previous two being Rev Seamus Houlihan in 1993 and Rev Tony Gounod in 2007.

Rev Weir will offer his First Mass of thanksgiving on Monday 7 December, the Vigil Mass of the feast of the Immaculate Conception.

A combined choir will provide the music for the ordination liturgy. Music for the First Mass is provided by the Le Chéile choir.