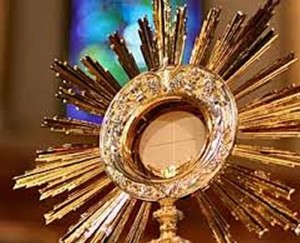 In a world bombarded with noise and often disturbing images, a woman from Meath is working to bring children into a deeper relationship with Jesus through Eucharistic Adoration.

Antoinette Moynihan from Kentstown travels the country promoting a programme called ‘Children of the Eucharist.’

The mother of two always had a strong faith, but in 2009 in Medjugorje, she came to an understanding that Jesus wanted her to do something connected to the Eucharist.

She started a Divine Mercy prayer group in her local parish and then hooked up with the Apostolate for Perpetual Adoration when she was asked to help with the ‘youth end’ of Eucharistic Adoration at a local Eucharistic congress in the run up to IEC2012.

This in turn lead to Antoinette and her husband being involved in organising youth adoration for the International Eucharistic Congress.

“Talking to the children coming out of the tent where we did the Adoration with them, I could see they were getting a lot out of it. I felt a sadness when I saw the tent going down,” she told CatholicIreland.net

She felt it should go on, and so starting with the local schools, and with the support of the Apostolate for Perpetual Eucharistic Adoration, she began to visit schools all over the country.

That was a year ago. Now Antoinette is constantly on the move from school to school.

Last week she was in Bruff and Abbeyfeale in Limerick. This coming week her journeys will take her north to Lurgan, south to Michelstown, centre to Tullamore and south again to Cashel.

Her programme involves speaking for an hour to First Communion classes about the real presence, confession and communion.

She has a monstrance, and shows it to the children, explaining what Eucharistic Adoration is. Opening the door of the monstrance, she peers through at them. “They can see me. I tell them ‘Jesus is looking through the monstrance and he can see you’.”

After the talk, Antoinette brings the children to the church and leads them in adoration for half an hour. By now they know about the tabernacle, the sanctuary light, the monstrance. A host is placed in the monstrance, and they sing ‘O Sacrament Most Holy.’

Then, Antoinette leads intercessory prayers, followed by the childrens’ own prayers. “They pray for everything: their mammies, grannies, cats, dogs. Recently they’ve been praying a lot for the Holy Souls.”

To finish the prayers, they sing the Our Father, adding hand movements and Antoinette reads a reflection she has written based on a bible story.

To end there is a period of prayer time, where the children ‘hunker down’ and pray to Jesus. They stay like that about five minutes. “Did Jesus speak to you?” she asks. The hands go up and they tell her what they felt.

A few weeks ago she was in a school in Ferns. A little girl said, “Jesus told me I’ll never be alone. He’ll always be beside me, holding my hand even if I can’t see him.”

The prayers and format of the Childrens’ Adoration has been prepared together with the Apostolate for Perpetual Eucharistic Adoration with ecclesiastical approval and Antoinette is faithful to the format.

Chapel of the Apparitions Knock

In April, she spoke for ten minutes in the Basilica at the Apostolate’s National Pilgrimage to Knock. Over 7,000 people were listening to her, including the Papal Nuncio, Archbishop Charles Brown.

Since then, there has been a steady stream of requests for her to come and speak at schools. She is alone and does the work as a volunteer but has been praying for ‘labourers’ to help her.

Now, she says, “women are sprouting up in different areas” who want to continue this ministry to children. “I leave them with the format and prayers and they are taking it ahead.”

The Children of the Eucharist programme is relatively new to Ireland and children are find it peaceful and reflective. They say “we have time to think” and “we like being in prayer with each other”,  she says.