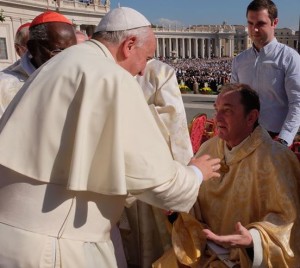 The parish priest of Kilskyre and Ballinlough in the diocese of Meath was overcome last weekend when Pope Francis imparted his blessing on him following the beatification of Blessed Paul VI.

Fr John Brogan has been coping with illness in recent times.

He was a student at the Irish College in Rome during much of the pontificate of Pope Paul VI and said it was a dream fulfilled to attend the beatification Mass.

During the Mass, Pope Francis described Paul VI as a “great Pope” a “courageous Christian” and a “tireless apostle.”

He said, “God is not afraid of new things! That is why he is continually surprising us, opening our hearts and guiding us in unexpected ways. He renews us: he constantly makes us ‘new’.”

He told the packed St Peter’s Square that a Christian who lives the Gospel is “God’s newness” in the Church and in the world. How much God loves this “newness”, he said.

At the end of ceremony, the Pontiff came over to where Fr John Brogan was seated to greet him and bless him.