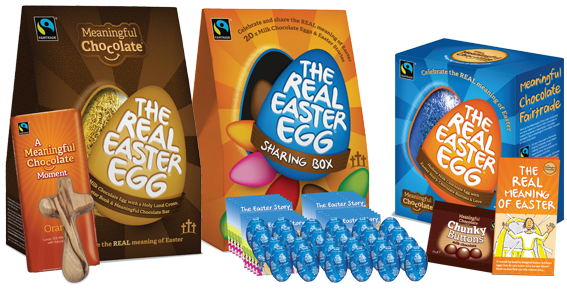 As thousands of people begin their six-weeks of abstinence from chocolate, the good news is that they will be able to celebrate Easter Sunday with a clear conscience thanks to the launch of the Real Easter Egg in Ireland for the first time.

Having proved an “eggs”traordinary success in the UK, the Real Easter Egg is being sold here thanks to the Bray Churches Working Together Group.

The special eggs not only taste good but spread the true message of Easter.

The Meaningful Chocolate Company, which makes these special eggs, underlines that out of the 80 million Easter Eggs sold in the UK every year, the Real Easter Egg is the only one which tells the Easter story, gives money to charity and is Fairtrade.

The company is urging congregations to promote the unique chocolate egg in their churches or to buy it in special Tradicraft and independent shops or online.

Among its supporters is the Anglican Archbishop of York, Dr John Sentamu, who has paid tribute to the Real Easter Egg as a great way to share the Good News of the resurrection of Jesus Christ.

“It reminds us that the best news of all is not in fact made of chocolate, but it is the love of God, given to us in Christ, our crucified, risen and ascended Lord,” he said.

This year there are three Real Easter Eggs.

The Original Real Easter Egg includes a 24-page Easter story book and a pack of milk chocolate Chunky Buttons in the box.

The Special Edition Real Easter Egg is made of Belgian milk chocolate and comes with an olive wood holding cross from the Holy land.

The third is the Sharing box, which is designed for services, assemblies and events. It comes with 20 ‘Christ is Risen’ foiled 6cm midi-milk chocolate eggs and 20 Easter story booklets.

The Real Easter Eggs are being sold in UK retail chains like Morrisons , Co-op, Waitrose and Tesco UK and Tesco Ireland.

‘When I came up with the idea of the Real Easter Egg, little did I think we would be welcoming it across hundreds of supermarket stores,” David Marshall of the Meaningful Chocolate Company said.

He explained that the development process took the Manchester-based company two years and involved a taste test with 120 bishops from England, Wales, Scotland and Ireland. The first eggs were sold in 2010.

“Our aim was to share the Easter Message and raise more than £60,000 through the egg for our various charities and we are on target,” he said.

The supermarkets still don’t stock enough, so last year (2013) more than 120,000 were sent through the post directly to churches and individuals.

The deadline for ordering these meaningful eggs on the company website is 17 March.

Irish people can order the Real Easter Egg range online. But this year for the first time a limited number of eggs will also be available, mostly through churches.

Those who wish to order in Ireland are advised to email [email protected] or look at the website  www.realeasteregg.ie for more detailed information.

In this country we consume over 9.5 million Easter eggs worth between €24 million and €28 million every year.

There are a number of more meaningful alternatives. For example, some of our monastic communities in Ireland sell chocolates in their gift shops and online.

The Benedictine nuns at Kylemore Abbey went into chocolate production after the famous boarding school closed a few years ago.

Now its items include the Kylemore Abbey Handmade Milk Chocolate Bar, made by the nuns in their chocolate rooms using Valrhona cocoa. It can be bought in the Abbey gift shop at Kylemore or online.

The monks at Glenstal Abbey sell several varieties of chocolates based on the Abbey’s recipes including  boxes of Dark, Milk & White Chocolates, or the more adult Glenstal Abbey Apple Brandy Truffles.

Another alternative to eggs or chocolate is to buy one of the many gifts from Irish aid agencies such as Trócaire and Concern such as fluffy chicks which are sent to a family and community in extreme poverty in developing countries.