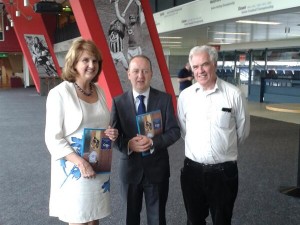 Homelessness is not just a political or social problem but a personal tragedy for each person who finds themselves homeless, Fr Peter McVerry has said.

In his message launching the 2013 annual report of the McVerry Trust, the Jesuit campaigner on homelessness said many of those now becoming homeless “never thought for one moment that they would ever end up homeless.”

He outlined something of the changing profile of those finding themselves newly homeless and the difficulties that they encounter.

“They seek a bed for the night and find themselves sharing a room with active drug users, and wake up to find all their belongings gone.”

“Frequently they are told there are no beds available and are offered a sleeping bag and told they will have to sleep rough.”

He said that finding themselves in this situation, they “are rapidly plunged into despair, quickly move into hopelessness, and self-esteem takes a plunge – and may never recover.”

In the presence of the Minister Joan Burton, Fr McVerry warned that homelessness will increase by 2016, not be eliminated as the Government had been suggested.

In the annual report, the priest stated “The future looks grim.”

He said that as home repossessions gather pace, as tenants who live in buy-to-let investments which go into receivership, are evicted, and as private landlords increasingly turn away, and even evict, social welfare tenants, to replace them with people who can afford the higher rents demanded, “a flood of new homeless people and families is coming down the river.”

The Jesuit warned that there was “no provision for the people who are becoming homeless and will become homeless.”

However, Minister Burton defended the Housing Bill at the launch on Wednesday.

But Fr McVerry appeared to imply that the housing assistance scheme was too little too late, warning that it could not “make a lot of difference” today as “the demand for renting far outstrips supply”.

Over 60% of the people who engaged with the Trust last year were young, single men.

Fr McVerry said, “If you’re 18 or 19 and you become homeless, unless you can move them out of homelessness very quickly then their situation becomes every entrenched.

CEO of the Peter McVerry Trust, Pat Doyle, noted that 2013 was a year marked by rising numbers of people presenting as homeless.

“The year was significant for many reasons not least because Peter McVerry Trust reached the milestone of its 30th anniversary,” he said and explained that despite the greater demands, the PMVT sought to respond to the growing and varied needs of individuals across its services.