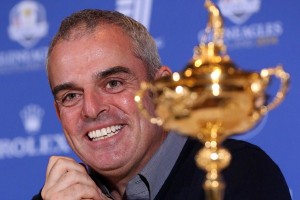 The Society of St Vincent de Paul (SVP) has expressed delight at the news that the charitable foundation of Ryder Cup captain, Paul McGinley, has nominated it as one of its beneficiaries during its term as an official charity.

The SVP and three other charities have been exclusively chosen by the McGinley Foundation for the 2014 Ryder Cup.

“The Society of St Vincent de Paul is very well known to me and my family in Ireland. They have a group of extremely dedicated volunteers and I look forward to working with them, helping in any way I can to drive its work across the country.” Paul McGinley said following the announcement.

SVP National President, Geoff Meagher, expressed his delight. “Support from organisations of this stature is vital in supporting thousands of Irish people who rely on our help,” he said.

The other three charities, which will benefit from the McGinley Foundation are the Tour Players Foundation, the charitable foundation of The European Tour and two UK charities: Amber, which helps homeless and unemployed young adults, and CLIC Sargent, which supports young people with cancer.

“All four causes are very important to me for a number of reasons and I am delighted to be able to support them and the vital work they do,” Paul McGinley explained.

“The McGinley Foundation allows me to do that through my status as Ryder Cup Captain and I would like to thank Ryder Cup Director Richard Hills and all his staff at Ryder Cup Europe for giving me this opportunity. It is a tremendous honour and a fantastic way to start my Foundation’s charitable work,” he said.