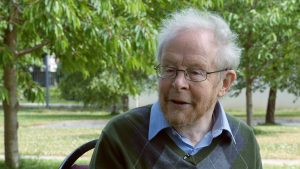 The author of a new book on Pope Francis says the Argentine pontiff’s agenda for change is making a “remarkable contribution to the Catholic Church and the wider world”.

In The Pope Francis Agenda, theologian and missionary priest Fr Donal Dorr examines the Pope’s defence of human life and of the family; the role of women in the Church; and migration and trafficking.

The book is a largely positive and enthusiastic overview of Pope Francis’ five-year tenure.

Fr Dorr also looks at the Pope’s condemnation of nuclear weapons; his insistence that simple everyday language should be used in translating the liturgy; his criticism of the present unjust structures of our world; and the crucial need to repair humankind’s damaged relationship with our planet.

Fr Dorr said he believes Pope Francis has inspired Christians and non-Christians alike with his heartfelt support for the poor and disadvantaged, as well as with his concern for the well-being of the earth.

Launching the book last Thursday evening at St Patrick’s College, Drumcondra, former President Dr Mary McAleese said it was a privilege to read “the eminent Fr Donal Dorr’s timely and hope-filled book, just one of many through which, in his long career of priestly and scholarly service, he has educated us about Catholic social teaching”.

She congratulated him and publisher Veritas on the publication and expressed the wish that it is read by a “big and appreciative audience”.

In her address, Dr McAleese said a book is sure to intrigue and excite interest especially with a visit from the Pope in just a couple of weeks’ time.

“Donal Dorr has impeccable timing when it comes to discerning the signs of the times,” she commented.

She described the Kiltegan priest as arguing with passion that “Christians are living in a Kairos time, a key moment of history, one offering a creative opportunity for something quite new and fresh to emerge in the way we experience and understand and live out our Christian faith”.

One half of the book deals with Francis’s concern for the environment, a leitmotif of his papacy from the very moment he chose the name Francis in honour of St Francis of Assisi, Dr McAleese stated.

The encyclical Laudato Si (May 2015) “confirmed Francis’s place as the darling of environmentalists and the great hope of those impatiently desiring a more open, collegial, talking and listening Church, tuned in to the signs and sounds of the times”, Dr McAleese said in her address in Drumcondra.

Here was a significant papal document which uncharacteristically drew from a wide range of ancient and contemporary sources, not all of them Catholic in origin, from Sufi mysticism to the Orthodox Patriarch Bartholomew and from many secular sources.

The Pope’s call to Christians to a spiritual ecological conversion will undoubtedly be long pointed to as a key part of his papal legacy, the former head of state said, and added that Fr Dorr was right to emphasise its contemporary impact by describing it as “a radical new model of Christianity”.

Dr McAleese added that Fr Dorr acknowledges that ecological issues constitute the “most original and significant aspect” of Francis’s teaching.

She noted that Fr Dorr points out there are other areas of Church teaching and governance where Francis’ views, actions and inaction have more latterly been rightly criticised by responsible Catholic commentators – areas such as clerical and Catholic institutional child sex abuse, and the role of women in the Church.

However, these criticisms do not detract from Fr Dorr’s “enthusiastic approval” of Francis’s achievements and overall agenda, Dr McAlesse said.

In a testimonial for the book, Jesuit campaigner on homelessness and social justice Fr Peter McVerry said, “For Fr Dorr, something radically new is taking place in our Church, right before our eyes. If Vatican II opened the windows of the Vatican to let the air in, Pope Francis is tearing down its walls to allow the Church to move out and confront the suffering, exclusion and marginalisation of so many and the unjust economic and political structures of our world.

“Pope Francis welcomes being challenged and Donal Dorr takes him at his word; he has not hesitated to be critical of Pope Francis’s response to issues such as child abuse and justice for women in the Church,” Fr McVerry said.

The Pope Francis Agenda: His teaching on family, protection of life, justice, ecology, women & the church is published by Veritas. See: https://www.veritasbooksonline.com/the-pope-francis-agenda-his-teaching-on-family-protection-of-life-justice-ecology-women-the-church-9781847308399-40636/