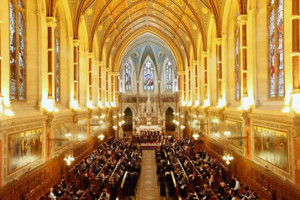 After two years of work, the great organ of St Patrick’s College, Maynooth has been completely restored and it was blessed and dedicated at a special ceremony of vespers on Sunday evening.

The organ was dismantled in September 2011 and transported to Italy to the firm of Fratelli Ruffatti in Padua.

After returning to Ireland in September 2013, it underwent extensive ‘voicing’ and ‘fine tuning’ and by Sunday it was fully ready for service.

Mgr Hugh Connolly, President of St Patrick’s College, told over 200 people gathered for vespers that the organ would “be a servant of the liturgy, the Eucharist that gives our campus community the weekly rhythm for our lives here upon our pilgrim path.”

He continued, “Its music will help us to bring the whole spectrum of human experience to our daily prayer. Its pure notes and perfect pitch will soar heavenward as students, staff and passersby pause to reflect here on their daily lives, bringing their prayers of loss and fulfilment, doubt and trust, confusion and conviction, happiness and grief, gratitude and praise to God.”

The original organ in the chapel was built by the Stahlhuth firm of Aix-la-Chapelle in Belgium around 1890.

After 120 years, it needed a total rebuild, as many of the 3,000 pipes were no longer playable.

The organ has had two major rebuilds in its life, in the 1920s and again in the 1970s. In addition, it has been regularly maintained, with several modifications.

The instrument features at all the great liturgical events during the Maynooth college year including the Easter ceremonies, ordination to the diaconate, opening of the academic year Mass, pontifical graduation ceremonies and annual carol services and choral concerts.

The organ is also used by some of the seminarians and students of St Patrick’s and their colleagues in the National University of Ireland, Maynooth, who are pursuing studies in music.

Mgr Connolly thanked the extraordinary generosity of those whose donations helped make this dream a reality.