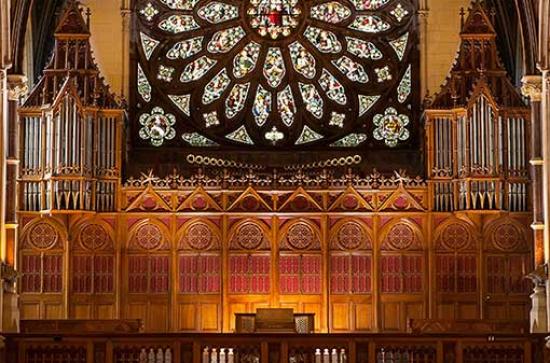 World famous musicians will be visiting St Patrick’s College Maynooth over the coming weeks to perform on the newly restored organ in the college chapel.

The first recital will be given by the world famous organist, Oliver Latry of Notre Dame, Paris on Sunday, 27 April at 4pm.

Subsequent recitals will take place on:

–  Sunday, 4 May at 4pm, given by James O’Donnell (Westminster Abbey, London);

–  Sunday, 11 May at 8pm, given by John O’Keeffe (Director of Sacred Music, Maynooth) in association with University Chamber Choir;

Commenting on the forthcoming recitals, the President of St Patrick’s College, Mgr Hugh Connolly, said, “It is truly a blessing to have reached the day where we can celebrate the fact that our College Chapel organ has at last been completely restored.”

“This magnificent instrument will feature at all the great liturgical events during the college year including the ordination to the diaconate, opening of the academic year Mass, Pontifical University graduation ceremonies and annual carol services and choral concerts.”

“It will also be played by the staff and seminarians of St Patrick’s College, Maynooth, as well as their colleagues in National University of Ireland, Maynooth who are pursuing studies in Music.”

“I hope it brings joy and inspiration to many future generations of our Maynooth formation and educational community.”

The Great Chapel Organ was rebuilt by the Fratelli Ruffatti company of Padua in Italy.

After 120 years of great service, the organ needed a total rebuild, as many of the 3,000 pipes were no longer playable.

It was dismantled in September 2011 and transported to Italy.

The rebuilt instrument returned in September 2013 and after extensive ‘voicing’ and ‘fine tuning’ is now fully ready for service.

The original organ of the College Chapel was built by the Stahlhuth firm of Aix-la-Chapelle, Belgium around 1890.

In addition, it has been regularly maintained, with several modifications.

For more information on the series: http://www.nuim.ie/music/events/international-organ-recital-series#sthash.sFgQ76Fg.dpuf