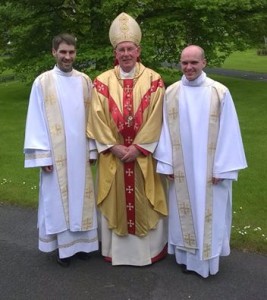 Sixteen ordinations, fifteen to the diaconate and one to the priesthood, were celebrated during the weekend. In the Archdiocese of Armagh on Friday, 30th May, Cardinal Seán Brady ordained Maciej Zacharek to the priesthood.

This was the first priestly ordination from Redemptoris Mater House of Formation, a new institution of the Archdiocese of Armagh, located in Dundalk. This House of Formation was founded in 2012 by Cardinal Brady to form priests for the New Evangelisation who are both diocesan and missionary. The seminary is one of 100 seminaries all over the world of the Neocatechumenal Way, with an estimated 3,000 seminarians.

Maciej Zacharek is 33 years old and originally comes from Wygoda, Poland. He started his formation to the priesthood in the Redemptoris Mater Seminary in Washington D.C., but was asked to come to Ireland to help start the new House of Formation in Dundalk, by Cardinal Wuerl of Washington.

After his diaconal ordination last November, Maciej Zacharek was assigned to the Holy Redeemer Parish, Dundalk. As well as working in the parish, he has also been helping to minister to the Polish community in the Dundalk and Drogheda areas.

Then yesterday 1st June Cardinal Séan Brady, Archbishop of Armagh and Primate of All Ireland, ordained fifteen seminarians as deacons at Mass celebrated in the College Chapel of the national seminary in Saint Patrick’s College, Maynooth. 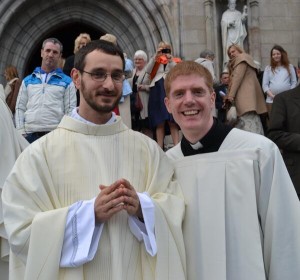 In his homily Cardinal Brady referred to the ordination of Maciej Zacharek at Saint Patrick’s Cathedral, Armagh.

At the ordination, he said, one of the Polish visitors told him: “Over one thousand years ago monks from Ireland came to Poland to bring us the Good News of Jesus. Today we are here to repay the debt”.

The Cardinal said that the words filled his heart with hope and joy because the Irish monks of 1000 years ago followed the same call that the disciples of Jesus followed when he said:  “Go, make disciples of all nations I am with you always, yes to the end of time”.

“This is Ascension Day. It is a great feast of hope. Jesus is beyond our sight. He has gone, not to abandon us, but to be our hope – for he sits at the right hand of the Father to intercede for us. Where he has gone, we hope to follow. Meanwhile God’s great plan for the whole world is, slowly but surely, being rolled out and carried out,” said Cardinal Brady.

He spoke of the difficulties the young men may have experienced in the past, but on ordination day they are on the mountain (in the Ascention story).

“They know that no power in Heaven or on earth will conquer what they stand for. They too can confidently go out into the world, teaching all nations to respect the values they believe in,” said the Cardinal.

All of the priests of the Maynooth College community concelebrated this ordination Mass with family, friends and other priests who attended.

Commenting after the Mass, Monsignor Hugh Connolly, the President of Saint Patrick’s College Maynooth, congratulated the 15 and said, “May each of them experience God’s grace afresh in their hearts so that they will courageously proclaim the Gospel in both word and deed and go out to serve the people of God in their various dioceses with care and compassion.”

The fifteen are as follows (diocese in brackets):

The fifteen men ordained in Maynooth are all transitional deacons who will be deacons for approximately one year before being ordained to the priesthood.

At present there are seventy resident seminarians studying in Saint Patricks’ College Maynooth and there are twenty more who attend on a daily basis to pursue their studies for the priesthood.

Saint Patrick’s College Maynooth has been forming men for the priesthood since 1795.