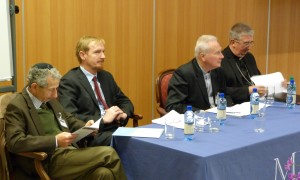 Archbishop Diarmuid Martin of Dublin has said Irish democracy must have no second class citizens.

In an address to formally open an interfaith conference at Mater Dei Institute in Dublin titled, ‘A Common Word and the future of Muslim-Christian dialogue’, the Archbishop said Ireland faces challenges to ensure that people of different faiths and confessional backgrounds “truly and effectively enjoy equal status in the eyes of the law.”

In his address, the Archbishop told religious leaders and members of the diplomatic and academic communities present for the conference that it is important for those of different faiths to know that their gifts and traditions are as fully a part of what ‘Ireland’ means today and in the future, as those of any other group in the population.

The two-day conference brought together for the first time in Ireland scholars who have already been involved in Muslim-Christian and Muslim-Jewish dialogue, including Timothy Winter (Sheikh Abdul Hakim Murad), Archbishop Michael Fitzgerald and Rabbi Professor Reuven Firestone.

Describing it as a “unique and important conference”, Archbishop Martin said Irish society must not “rest of its laurels” where recent incidents of religious, ethnic or xenophobic behaviour are concerned.

We all live with “inherited prejudices, misunderstandings and stereotypes” and these can “subtly and rapidly raise their ugly heads if we are not attentive,” the Primate of Ireland warned.

Ireland, he suggested, has no wish to remain a “closed monolithic culture on an island isolated from what is happening around the world” and he commented that dialogue between faiths is not just for scholars and theologians. “It is a public good even in societies that proclaim themselves secular,” he said.

Acknowledging that some may ask why hold a conference on interfaith dialogue in Ireland, Archbishop Martin said many are unaware of the fact that Ireland is today very much a multi-faith country.

“The religious demographics of Ireland are changing and will continue to change,” he commented and referred to recent census figures which indicate that the Islamic population in Ireland may still small by international standards but was growing. 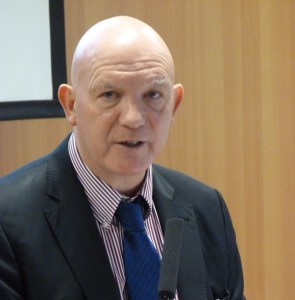 “Ireland is a young country. In the territory of the Archdiocese of Dublin, there are more children under four years of age than people over seventy. These young people belong to many faiths and thus the population will be very different in the coming years. Very soon they will be together in school and it is important that Irish society be prepared to make this a moment of opportunity and respect.”

He added that because of the fact that large scale immigration is a relatively new phenomenon, Ireland has the chance – right from the start – to get right and to learn early from the mistakes of others.

On the issue of faith and violence, the Archbishop warned that when the activities of believers become contaminated with political ideologies, people drift from the core of their faith and from one another.

He told CatholicIreland.net, “Here in Ireland, we have to learn to understand one another, to appreciate one another and you can only do that if you want to come together.”

One of the contributors to the conference was Sheikh Abdul Hakim Murad of the University of Cambridge. He explained the motivation for the Common Word document by 148 Muslim scholars was the doctrine of the Bush years and the “religionising of foreign policy discourse.”

He said it was a “practical manifesto in an increasingly unloving and un-neighbourly world.”

The Common Word initiative refers to an open letter titled A Common Word between Us and You (taking its title from the Koran 42:13) that was launched on 13 October 2007.

The letter came from Muslim religious leaders to the Christian churches and has become a leading initiative in interfaith dialogue. 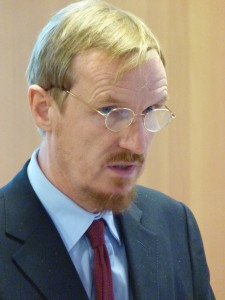 Timothy Winter (Sheikh Abdul Hakim Murad), University of Cambridge, one of the signatories to the Common Word document.

It was signed by 138 prominent Muslim scholars representing all significant schools of thought in Islam, through the initiative of Prince Ghazi bin Muhammad of the Royal Hashemite Kingdom of Jordan.

The Common Word comes as an effort to recognize common ground between Christianity and Islam on the basis of the foundational principles of ‘love of God and love of neighbour’.

It invites Christians to join hands with Muslims to promote world peace and harmony in the name of God.  Much has been accomplished since the document’s launch.

The official website of the Common Word now includes a roll-call of the leading Christian figures of different denominations including Pope Emeritus Benedict XVI, the Russian Orthodox Patriarch and the former Archbishop of Canterbury, Dr Rowan Williams, among others.