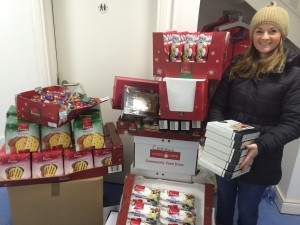 Crosscare’s warehouse in Glasnevin where the donated food is being sorted and redistributed.

Crosscare’s appeal for food donations to restock its food bank has yielded 120 tonnes of non-perishable food, an increase of 40 tonnes on last year’s appeal.

The appeal was launched at the beginning of the month by Archbishop Diarmuid Martin of Dublin.

According to Michael McDonagh, Crosscare’s Senior Manager for Food Services, food is still coming in.

He said that December is a particularly difficult time for the food bank because there are fewer food drives in the run up to Christmas.

At other times of the year, these food drives are run by groups such as scouts and parish groups, and they keep the food bank stocked with goods so that supply matches demands.

However, in the run up to Christmas, many families are stretched financially trying to cover the costs of Christmas and so they are unable to cover all their cost and therefore they seek the assistance of Crosscare’s food bank.

In a letter sent to parishes in his diocese, Archbishop Martin said the early indications are that more food was collected this year through an appeal over one weekend as was collected over three weekend collections last year. 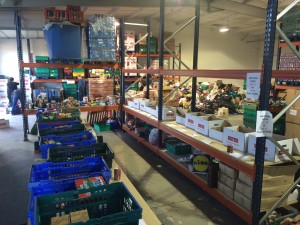 “This is a remarkable tribute to the generosity of the Mass-going Catholics of the Archdiocese of Dublin who so readily responded with this form of direct care for the less fortunate,” he said.

He also expressed thanks to those who brought food to their parishes in response to the Food Bank appeal.

However, demand for help from Crosscare has increased dramatically. In 2012, the charity distributed 500 tonnes of food, this rose to 750 tonnes in 2013 and is expected to reach 1,200 tonnes by the end of this year.

Michael McDonagh told CatholicIreland.net that as recently as two years ago it was possible to identify those most likely to need assistance from the food bank.

“But these days it can be anybody – a working family, for whom a car repair is an unexpected cost beyond their budget and in order to cover it, they have to cut back somewhere and that ends up being on food. That’s where we can help,” he said.