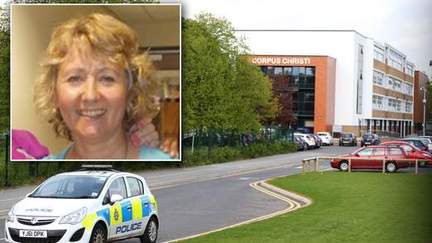 More than 300 parishioners and former pupils gathered for Mass on Tuesday in Corpus Christi Church in Leeds to pray for murdered schoolteacher Anne Maguire.

Parish priest, Mgr Paul Fisher, told the congregation: “Yesterday evening, the community gathered here in church as well as outside to light candles and to say a prayer. By the time the church was closed, the candelabras were full of light.”

“Today we pray for the light of hope. Hope for ourselves that we will come to terms, eventually, with what has happened. We pray for all those young people at our school next door and their teachers. We pray for Anne’s family and friends. “

Fr Paul said many messages of condolence had already come from across the country and overseas.

Archbishop Malcolm McMahon OP, Chairman of the Catholic Education Service, said he was “shocked and saddened to hear of Anne Maguire’s death. My prayers, and those of every Catholic parish and school in England and Wales, will be with her family and friends, the staff and students of Corpus Christi Catholic College in Leeds, and all who have been affected in any way by this senseless tragedy.”

“Anne gave her life to the College and Catholic education, and thousands of young people have benefitted from her kindness and hard work over many years. May she rest in peace.”

Cardinal Vincent Nichols said: “I express my utter shock and sadness at the tragic killing of Mrs Anne Maguire at Corpus Christi College. My heart goes out to her husband and daughters, to their wider family, to everyone at Corpus Christi Catholic College and to the parishes connected to the College.”

The popular teacher was stabbed to death on Monday morning, in front of pupils at a school in Leeds.

The 61 year old, who taught Spanish at Corpus Christi Catholic College, was rushed to hospital following the attack but later pronounced dead.

A 15-year-old boy who was detained by teaching staff after the incident was later arrested.

Chief Superintendent Paul Money of West Yorkshire Police said: “The incident itself was over very quickly and no other pupils or staff were threatened or injured. However, this has clearly been a very traumatic situation for those involved.”

He said the attack was an “unprecedented event” and schools in Leeds were “generally very safe places” to work and study.

Staff members were “in shock” and Mrs Maguire’s death would “understandably have a massive impact” on her family and the school, he added.

The college has 950 pupils and according to its website retains “traditional values”, describing these as “a strong Christian ethos, a broad and varied curriculum, good teaching and learning, excellent discipline and outstanding pastoral care”.

Tom Riordan, chief executive of Leeds City Council, said: “We are aware of the serious incident at Corpus Christi Catholic College this morning and our thoughts are with all those concerned… We are working with the school to support pupils and staff at this very upsetting time.”

“Our condolences go to the family and friends of this teacher, and to students and colleagues at the school.”

One of Mrs Maguire’s students, Matthew Calvert, 16, said she had worked at the school for 40 years.

“She was a fantastic teacher, she couldn’t do enough for people,” he said. “She wanted the best for pupils… she was definitely one of the best teachers here.”

Former pupil, Kerianne Ayward, 17, told the BBC: “No-one had a bad word for her – I mean no-one. She was the heart of the school.”

Many floral tributes and messages have already been left at the school gates.