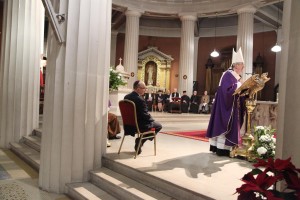 If we fix our hearts on doing what is right, we can still today master the effects of evil, Archbishop Diarmuid Martin said at a Mass in solidarity with the people of France at the Pro Cathedral on Tuesday.

The Mass took place on the day that funeral ceremonies were held for seven of the victims killed in last week’s terror attacks in Paris.

In his homily, Archbishop Martin told the congregation that they were also gathered in solidarity with those anywhere in the world who suffer the effects of violence and evil.

“The events of Paris last week have shocked and stunned us. It was an attack on a city, on a nation, on a culture, and on democracy,” he stated. 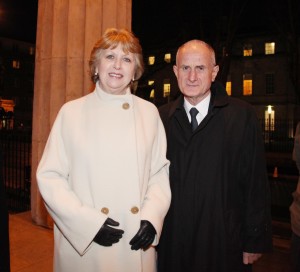 The French ambassador H.E. Jean-Pierre Thébault organised the service along with the archdiocese of Dublin and the attendees were led by President Michael D. Higgins and Mrs Higgins as well as religious, political, civic and diplomatic representatives including former president Dr Mary McAleese and the Lord Mayor, Mr Christy Burke.

Archbishop Martin prayed for all those who were the victims: those killed, wounded and traumatised as well as their families.

“We pray for the perpetrators: those who fell victim to destructive instincts exploited by false and disparaging visions of faith and life.”

Calling for the building up of a culture of dialogue and respect, he said “We must do it honestly and with the courage to tackle what is wrong in our own hearts, in our own cultures, in our own religious traditions.” 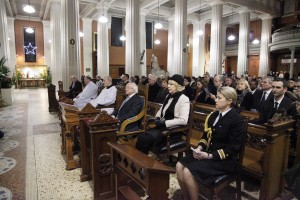 The Primate of Ireland underlined that violence is not less serious or of lesser concern to us when it happens in places and contexts which are distant from us, as in the violence in the Middle East or the horrendous violence in Northern Nigeria.

“Where we allow violence to flourish anywhere, we are breaking down those factors which curb the capacity for destruction which is always lurks deep in human hearts.”

Recalling an article written by Pope Francis’ friend, Rabbi Abraham Skorka in Buenos Aires, in the aftermath of the Paris attacks, the Archbishop noted that it reflects on how in the twentieth century the confused passions of European societies came to shape dramatic conflicts which left behind a trail of death and destruction never seen before.

In two World Wars and in numerous conflicts and persecutions, “those elements which within a civilised culture can curb the potential for destruction which always lies within human hearts were shattered”.

He warned, “We must never allow that to happen again. If we fix our hearts on doing what is right, we can do that. If not, we open the path to violence, destruction and death.” 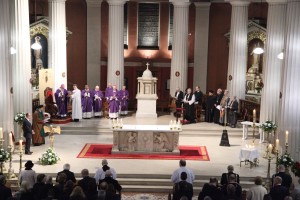 Elsewhere in the article, Rabbi Skorka stressed that every act of violence and barbarity represents the bankruptcy of the culture which inspires it and he added “when religion becomes a constitutive component of such barbarity it reflects the complete failure of the purpose of religion”.

He called on religious leaders to have the courage to develop a religious dialogue which knows how to unite hearts.

He called on religious leaders of every creed, alongside those whose lives are inspired by science, by the arts and by all other forms of human creativity to commit themselves together, explicitly and unequivocally, “to take up the challenge which God posed to Cain and overcome every instinct towards destruction with the strength of our spiritual forces”.

Archbishop Martin concluded by stating that the challenge of belief in a God of life and love is to challenge the destructive passions of human kind wherever to raise their ugly head.

“May the God of love, of mercy and compassion guide us and enlighten the hearts of all of us who with courage dream dreams of peace.” 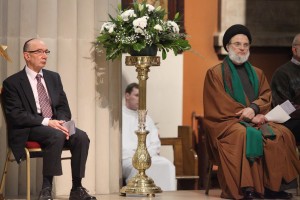 At the end of Mass, the Church of Ireland Primate of Ireland, Archbishop Michael Jackson gave the following reflection:

“Whether this comes to you as a well-worn truism or as a piercing insight and painful revelation, it is something that will not go away as we are washed over by grief and hounded by sadness at the devastation and destruction of human life in Paris last week. Our thoughts and our feelings are most keenly for those who have been killed and for those who mourn the loss of these precious lives …

The face of those whom we admire and respect, the face brilliant, sparkling, probing and creative which we will see no more; the face deprived of energy, movement and life itself by a death which destroys life by its own authority alone, without consultation or compassion, and dismantles the ebb and flow, the give and take of life as we know and love it, where cultures and people meet …

The face of the neighbour whom we know well or whom we don’t really know at all; the face of the person who, in the earliest understanding of our religions, holds and reflects the image and likeness of God in the face of humanity …

The face of the other and the face of the enemy; the appetite for engagement and for dialogue is not there. The time will come when it will have to come …

As fellow-human beings of religion and of no religion our cry is for solidarity, for security and for society and we cry for one another from the deep well of sorrow, sadness and sympathy. 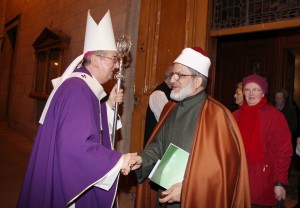