Mass for motorists in Moyvane with drive-in Church services

The parish priest of Moyvane has found a way around the ban on public worship by offering ‘drive-in’ Masses: Fr Kevin McNamara celebrates an open-air Mass with a congregation that remains sitting in their cars throughout the service. 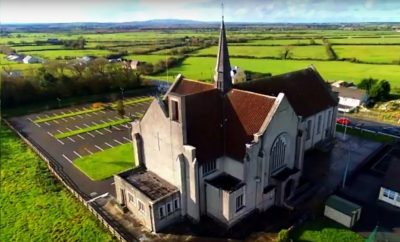 To make sure the liturgy is heard, the canny Kerryman uses the public-address system that in normal times is used to broadcast the bells at the Church of the Assumption.

“I don’t like the term ‘Drive-in Mass’ or ‘Drive-thru Mass’,” he said. “It just so happens that we are lucky to have a large car park and we can celebrate Mass this way without blocking up the main road with parked cars.”

Mass is celebrated each evening at 7.30 p.m., after a recitation of the Rosary at 7.15 p.m., and the system is also used for Sunday morning Masses at 11 a.m. Last Sunday, there were worshippers present in fifty cars, he says.

“This is for parishioners who don’t have Wi-Fi or internet or computers and have no access to streaming services,” he says. “It is also only for my parishioners – the 5km restriction on travel still applies. I would not like people coming from all over the country.”

As with online Masses, at present, Fr Kevin can only offer his parishioners ‘spiritual communion’, there is no distribution of the host. However, he said: “That is something I am working on. If chemists can distribute medicines from behind Perspex screens that is something we might be able to do with Communion.”

The parish priest says that the inability to physically receive the body and blood of Christ in the host is a cause of much sadness among the faithful. “It is the biggest ache in their hearts,” he says. “To not be able to receive communion at this most difficult time is very hard on people. In this parish, it is a wonderful consolation for people to be able to see a priest in vestments celebrating Mass. It’s better than an online Mass, because while you are here you can concentrate; there are none of the distractions of home.”

Daily, and even weekly, Communion is a relatively new practice within the Church, as it only became commonplace after the Second Vatican Council, but Fr Kevin says that should not take away from its importance to people today. “It’s like anything you get used to – once it is gone you miss it, like the way some people would start pining for a rasher on Good Friday!”

The parish priest says that when the pandemic first started, priests and bishops were very frightened and, naturally, they followed government regulations to the letter, but he said: “The churches will reopen in August or September, so now is the time to start planning how we are going to do that safely and in the best way possible.”