Mary Robinson speaks up for ‘small’ farmers in Honduras

Mary Robinson with women Trocaire is supporting in Honduras

Malnutrition and hunger are the ‘new normal’ for countries affected by El Niño and climate change.

This is according Mary Robinson, UN special envoy for El Niño and climate change, on a visit to Honduras.

“We need to make it clear that people are bereft of their own resources and we are seeing malnutrition and acute malnutrition among children,” Mary Robinson, told the Thomson Reuters Foundation.

“It’s absolutely necessary to understand that this is the new normal.”

One in four of the eight million population are affected by drought and they struggle to provide food for themselves and their families.

Around a quarter of all young children in Honduras, aged between six months to two-and-a-half years, suffer from chronic malnutrition.

There have been two consecutive years of severe drought. This is being linked to the influence of the El Niño climate phenomenon which is a warming of the Pacific Ocean’s surface that causes hot and drier conditions.

Such heat has destroyed crops and devastated the lives of subsistence farmers in the “dry corridor” running through Honduras. Bean and maize crops have been reduced by up to 90% in some areas, which has caused food prices to rise. 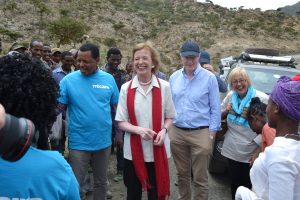 The poorer farming families have been badly affected and they have cut out some meals, and many have left in search of better prospects in the United States.

“Trust needs to be forged between communities and the government,” she said, stating that there is very little support for small-scale farmers, while government funds are spent on building dams and large-scale palm oil projects.

Thanks to the support of the Irish people, Trócaire is currently providing emergency support to 7,500 families – approximately 40,000 people – in Honduras.

“Our support targets the most vulnerable through food distribution, provision of seeds, irrigation and other methods aimed at improving food production and nutrition in the face of the drought,” stated Trócaire’s Eoghan Rice in a blog.

Mrs Robinson met families in the Pespire region, where many young people have been forced to leave the land and migrate to cities because of the ongoing impacts of climate change.

Trócaire stated that more than 85% of the population rely on agriculture but the majority of farmers earn less than €400 a year.

Farmers in Pespire say that climate has changed in the last 30 years. Temperatures are much higher during the day, it is raining less often and when it rains the amount of water that falls in a short period of time is high.

In that area maize yields have dropped to less than 40% of the average normal yields in Honduras.

As a result of the scarcity of available food, prices have gone up, especially maize and beans. At the moment the price of maize has increased in Pespire by 70%.

Guatemala and Honduras have been worst affected, and some 2.8 million people are in need of humanitarian assistance, such as food, health care, and activities to recover livelihoods and increase resilience.