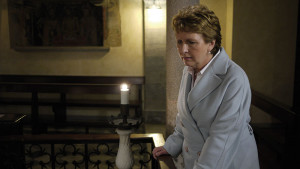 Former Irish president Mary McAleese has said she is proud of the pivotal role Irish monk St Columbanus had in setting out a founding vision for Europe.

Dr McAleese was speaking about a major new documentary on St Columbanus, who died 1,400 years ago this year, which will air on RTE Television later this month.

Speaking to Joe Duffy on Sunday’s Spirit Level, the former head of state described the documentary as “the story of a great Irish monk” who “literally changed the fate and faith of Europe” in the dark ages.

‘Mary McAleese and the Man Who Saved Europe’ was directed by Declan McGrath.

Explaining what motivated her to get involved in the documentary, she said the Saint was a unifying figure and the first person to put forward the idea of being European.

“But he also argued very strongly that he wanted to maintain his Irish identity and his Irish ways of doing things,” she said.

He saw that it was important to work together in a common partnership as Europeans and to stop the petty factionalism.

“He was a leader; he wasn’t passive but he believed in peace. He had many rows in his lifetime and had a go at the pope and bishops. He was a tough character. When he saw those in positions of leadership not doing what leaders are supposed to do, but engaging in pettiness, being greedy, being lazy, he felt obliged to stand up to them,” she told Joe Duffy.

The Irish monk played a major role in rekindling the Christian faith in Europe during the Dark Ages.

He and his followers established over one hundred centres of scholarship and spirituality throughout the European continent. These foundations are said to have preserved Western civilisation.

In the documentary, the former president travels through Ireland, France, Austria, Switzerland and Italy to uncover Columbanus’ legacy.

She discovers that the ultimate relevance of Columbanus’ story is how it shows the benefits of being hospitable to the “other”, and how such openness to diversity can offer lessons to the often fractured Europe of today.

Two versions of the documentary have been made, one in English and one in Irish.

In the documentary, Dr McAleese tells the viewers that it is a story of a man who 1,400 years ago brought fresh radical thinking to a Europe which was in crisis.

“His ideas saved Europe then, they are needed again today. That man was an outsider who came from what was seen as a primitive and backward land.”

That great monk and missionary died in Bobbio in 615AD. He had left his monastery in Bangor in the summer of 592 and to set out as a pilgrim for Christ accompanied by twelve brothers from the community.

Their journey took them first to present-day France, then Germany, Switzerland, Austria and finally to Bobbio in Italy.

He founded a number of monasteries in Annagray and Luxeuil, in France; Bregenz in Austria and Bobbio in Italy where he died.

In St Peter’s Basilica, pilgrims can see a mosaic dedicated to St Columbanus which bears the inscription: ‘If you take away freedom you take away dignity’. The phrase is taken from one of the letters of Columbanus.

‘Mary McAleese and the Man Who Saved Europe’ will air on RTE One Television on 24 November at 10.15pm.