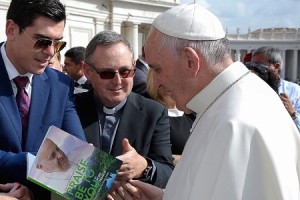 Theologian and Mary Immaculate College lecturer, Fr Eamonn Conway, has said it was a “privilege” and a “great honour” to meet Pope Francis at the Vatican and present him with a copy of his latest book.

Fr Conway, who is head of theology and religious studies at the Limerick College, travelled to the Vatican last week to present Pope Francis with a copy of his study guide to the Pontiff’s recent encyclical on the environment, ‘Laudato Si’.

The priest, who was ordained for the archdiocese of Tuam, co-authored the book with journalist Cathal Barry, who writes for the Irish Catholic newspaper.

Speaking to CatholicIreland.net, Fr Conway commented, “It was a great privilege to meet Pope Francis personally.”

“Even though he meets so many people, he makes time for everyone. While we were in an area where we knew we would meet him, he first went to greet the sick and disabled, which I found impressive and it says a lot about the person he is, and the way we all should be,” said Fr Conway.

The Tuam-native, who has been in Limerick for 16 years and was ordained in 1987, also revealed that there was “no discussion of the Pope’s potential visit to Ireland next year” which is already being greatly anticipated.

The first edition of the study guide was published early in the summer but quickly sold out and it is now on its second print.

Fr Conway, who is a prolific author, revealed that he is now working on a book about the spirituality of Lough Derg.

Cathal Barry revealed that he was “deeply moved” by the experience.

“It was an incredible moment to meet Pope Francis in person having reported on his ministry since his election. I was deeply moved and honoured to have met him,” he said.

‘Laudato Si’ is Pope Francis’s second encyclical. Care for creation is something that is close to his heart.

In ‘Laudato Si’, Pope Francis warns that there are significant ecological problems today that need to be addressed. These include problems in the natural environment and also in the human sphere, particularly among the poorest.

The Companion and Study Guide to the Encyclical Praise be to You by Pope Francis by Fr Eamonn Conway & Cathal Barry contains a foreword by Éamonn Meehan of Trócaire and a prologue by the Primate of All Ireland, Archbishop Eamon Martin. It is published by Grace Communications.