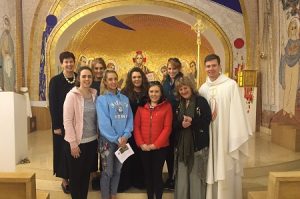 An innovative approach to the teaching of religion in primary schools has seen 18 trainee primary school teachers from Mary Immaculate College (MIC) in Limerick city travel to Rome recently as part of their Religion and Creativity module on the BEd programme at the college.

The students spent a packed five days in Rome on a guided tour of selected ancient Roman, medieval and modern sacred religious sites and art in order to appreciate the key role that the creative arts play in religious life.

Accompanied by Dr Patricia Kieran, lecturer in Religious Education, MIC and Dr Nóirín Ní Riain, the students were based in the Irish College in Rome where they were warmly welcomed by Rev. Paul Finnerty, Vice Rector of the Irish College, who was well known to the students. Up until 2016, Fr Finnerty served as Diocesan Secretary of the Diocese of Limerick and was last year appointed to his current position in Rome.

Fr Paul took the students on a guided walking tour of some key historic sites, including the Colosseum, Constantine’s Arch, Trajan’s Market, the Roman Forum, the Victor Emmanuel Monument, the Pantheon and the French Church, which houses three Caravaggio paintings.

A highlight for many on the trip was the stunning performance by Nóirín Ní Riain, who sang in the Church of the Martyrs in the Irish College at the ordination of three Irish students to the diaconate. She was  accompanied by MIC student Annmarie O’Riordan.

A senior lecturer at Mary Immaculate College, Dr Nóirín Ní Riain said: “These halcyon days in Rome with some 18 students of MIC were transformative and miraculous for us all on so many levels.

“We were awe-struck … by the historic buildings but more so the spiritual presence of the spaces. The entire experience was punctuated with many prayer moments such as singing together ritualistically at the Pantheon, having the privilege of performing at a diaconate ordination and meeting with many people for whom the Christian faith is paramount in their lives.

“These students will never forget the experience and their lives, their teaching, will be forever transfigured in the good of it all. I am so honoured and privileged to be part of it and to contribute to its phenomenal success in some small manner.”