Scholarships valued at €2,000 each will be offered on the basis of results obtained in the Leaving Certificate Examinations. 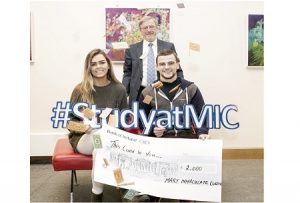 Mary Immaculate College (MIC) in Limerick recently announced details of a scholarship scheme for incoming students with a total value of €100,000 per annum.

Commencing in September 2017, MIC will offer a total of fifty entrance scholarships to incoming undergraduate first year students across all nine undergraduate programmes currently on offer by the college. These scholarships, valued at €2,000 each, will be offered on the basis of results obtained in the Leaving Certificate Examinations.

Speaking on the announcement, Prof. Eugene Wall, Vice President and Registrar of MIC, said: “We are delighted to launch these scholarships and we can be confident that the financial supports provided by this scheme will make Mary Immaculate College an even more attractive choice for students”.

Welcoming the announcement, James Deegan, President of the Students’ Union at MIC said: “MISU welcomes the announcement by MIC of the undergraduate scholarships which will be offered across the nine programmes to incoming first year students. We look forward to working with the college to extend these scholarships beyond academic merit to include areas such as sporting achievements, talent and excellence in the creative arts and highly able students facing financial hardship”.

Mary Immaculate College was established as a dedicated primary teacher training college in 1898 by Bishop Edward Thomas O’Dwyer, Roman Catholic Bishop of Limerick, and the Sisters of Mercy. Its foundation stone was laid on 8 December 1898 and the college officially opened in 1902, accepting female students from Munster.

In 1969 the college accepted male students for the first time. From 1974 to 1991, Mary Immaculate College was a recognised college of the National University of Ireland. 1974 saw the commencement of the BEd degree with the first graduates in 1977 (the course was previously a two-year National Teachers’ Diploma). Since 1991, degrees have been accredited by the University of Limerick.