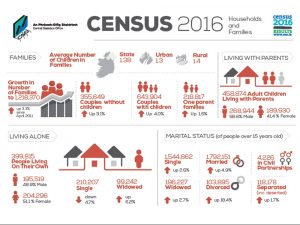 The latest of eleven planned reports on Census 2016 has shown that the number of married people increased by almost 5 per cent to 1,792,151 between the 2011 and 2016 censuses. This brings to 47.7 per cent the number of Irish people who are married.

However, the number of separated and divorced people also increased at a stronger rate, up by almost 9 per cent to 222,073 from April 2011. The peak age for separation and divorce was 53.

The information contained in the CSO’s ‘Households and Families’ report on the 2016 census also showed almost half a million Irish adults (460,000) live with their parents, nearly 60 per cent of whom were men. This is an increase of 4.4 per cent on the previous census.

Commenting on the report, the Iona Institute, a think tank supporting marriage and family, said the data showed marriage was in decline, even if there were more married people.

“Overall, the dominance of marriage has declined with the rise of cohabiting couples, divorce and separation, and single-parent households,” said David Quinn, Director of the Iona Institute.

In support of his statement, Mr Quinn noted that one in three children are now being raised in non-married households. This figure was less than 20 per cent 30 years ago. Including the number of people who have remarried, the total number of adults who have been through a broken marriage is now 283,802, up from 40,000 in 1986.

Research from Ireland cited on the Iona website showed the benefits to children of being raised in a two-parent family. “The vast majority of two-parent families investigated in the study are married families,” he said. “So, since marriage is important, and especially so for children, why is the decline of marriage in Ireland not a cause for concern among the people who run the country?” he asked in a blog.

“I think it is because those who run this country see the decline of marriage as a form of ‘liberation’,” he continued. They think that “if alternatives to marriage are becoming more popular that must mean people today have more choices about the kinds of families they form and that can only be a good thing,” he surmised.

“We need to get beyond the present ‘happy-clappy’ talk about the changing Irish family and instead see that the decline of marriage is a bad thing overall and to start talking about it in these terms. We certainly ought to do that if we are really the kind of child-centred society we like to pretend we are.”