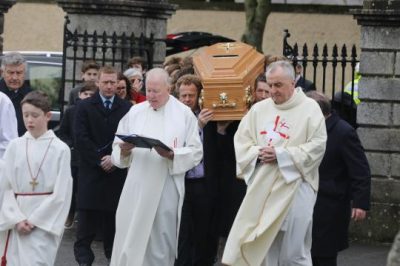 Marian Finucane had “great empathy” and a “sense of fairness” and “treated everyone with courtesy and respect”, her cousin Monsignor Ciaran O’Carroll told mourners gathered in St Brigid’s Church, Kill, Co Kildare on Tuesday for the broadcaster’s Funeral Mass.

In his homily, Mgr O’Carroll, who is rector of the Pontifical Irish College in Rome, and a first cousin of the esteemed RTE Radio host, admitted that the news of her death “came as a dreadful shock”.

In a tribute, he said she was “such an icon of Irish broadcasting and will always be remembered for her outstanding journalistic abilities, her keen intellect, warmth, wit, thoughtfulness, compassion and kindness”.

Quoting from the Second Reading, ‘The life and death of each of us has its influence on others’, Mgr O’Carroll said the influence of Marian Finucane was significant.

“The contribution Marian made to advancing and shaping our nation and its peoples through her professional work as a courageous broadcaster, and her determination to facilitate conversation without fear or favour, was repeatedly and wonderfully captured in countless public tributes paid over recent days.”

Elsewhere in his homily, he said the 69-year-old had been “A generous and determined woman, and a thoughtful and kind friend whose keen sense of humour enriched the lives of many, her charity work at home and abroad was simply outstanding.”

“Thousands always enjoyed her programmes and she will be missed on the radio. Publicly the nation has lost a skilled broadcaster.”

“Marian was blessed with an indomitable spirit which she had to call on often in her full, dynamic and fruitful life. Blessed with energy and dynamism, determined and persistent, she had boundless curiosity about life and the world.”

“Throughout her eventful life she was privileged to experience many changes and received the grace to confront various, sometimes demanding, challenges.”

Acknowledging the pain of her husband John Clarke and her son Jack and wider family, the Dublin priest said, “Privately John has lost a soul partner, Jack a loving mother and Jenny a cherished mother in law.”

The exuberant joy shared by the family and friends a few short months ago at Jack and Jenny’s wedding contrasted now with the sorrow and sadness they were experiencing at Marian’s funeral.

“She had to carry the cross of bereavement with the death of her beloved daughter Sinead – a bereavement she bore with tremendous dignity. In the face of Sinead’s death, Marian mobilised all of her formidable strengths and skills by dedicating a whole chapter of her life to supporting the hospice movement at home and establishing a hospice charity in South Africa. Indeed many were the recipients of her quiet generosity and abundant charity.”

He told the mourners drawn from family, friends and professional colleagues, “Today, here in St Brigid’s Church, as we mourn for Marian, we place our trust in Christ. We pray that the promise which He made to His apostles will be realised for her and we ask the God of peace, strength and hope to be with us and with all who are bereaved this day.”

He concluded his homily with the payer, “Marian – May the angels welcome you into Paradise. May the saints come to greet you and bring you to the Holy City, the new and eternal Jerusalem. May you rest in peace. Amen.”

Mgr O’Carroll was the chief celebrant at the Funeral Mass which was concelebrated by Bishop Éamonn Walsh, Auxiliary Bishop Emeritus of the Archdiocese of Dublin, and Fr Willie O’Byrne, parish priest of Kill.