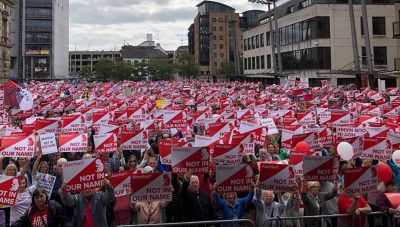 More than 20,000 pro-lifers from across Northern Ireland took part in the March for their Lives event in Belfast on Saturday.

The march was a protest against attempts in Westminster to impose legalised abortion on the region.

In July the UK Parliament passed the Northern Ireland (Executive Formation) Act, which chiefly aims to make provisions for the fact that unionist and nationalist politicians can’t reach agreement to allow for the legislative assembly to meet at Stormont Castle, as set out in the Good Friday Agreement.

However, the act also includes a provision that allows the United Kingdom government to regulate access to legal abortion in Northern Ireland, if a legislative assembly is not formed by 1st October.

Saturday’s March for their Lives demonstration was organised by a coalition of pro-life groups, including Precious Life, the Life Institute and Youth for Life NI.

Among the thousands present was Archbishop Eamon Martin of Armagh. Also at the march was the former Northern Irish police ombudsman Baroness Nuala O’Loan, who said imposing abortion legislation undemocratically on the people compounded the wrong that was already being done to them by the failure of the Members of the Legislative Assembly to agree to work with one another.

Bernadette Smyth of Precious Life said her organisation was heartened and encouraged by the turn-out. Customs House Square was awash with pro-life banners, and because of the demonstration traffic in some parts of Belfast city centre was at a standstill.

“It showed that the pro-life majority of Northern Ireland are fighting back against this undemocratic law,” Ms Smyth said.

“More than 20,000 people, from every tradition, attended the march because people are outraged that Westminster has hijacked our democratic process and has sought to impose abortion on Northern Ireland right up to seven months and in certain circumstances, right up to birth.

“The pro-life majority of Northern Ireland came out in their thousands today to say loud and clear ‘Abortion? Not in our name!’”