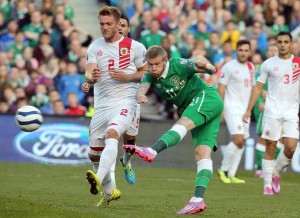 The manager of League of Ireland title holders, Dundalk, has given a ringing endorsement to the Republic of Ireland’s left-winger, James McClean.

Speaking ahead of tonight’s crucial Euro 2016 tie against Scotland, Stephen Kenny, who was McClean’s manager at Derry City told CatholicIreland.net that he was “one of the most decent human beings you could meet.”

McClean has often been in the eye of a storm since he transferred to Sunderland from Derry City.

Much of this stems from his principled refusal, as a Catholic from Derry, to wear the British Legion’s poppy.

However, Kenny is full of praise for a player in whose career he played a major role and who will line out in Celtic Park this evening.

“He made himself great,” says Kenny, “and he should still be playing in the Premier League.” McClean dropped down a division when he signed for Wigan last year.

The Dundalk manager recalls how he “practised and practised so much we had to stop him practising”.

“He doesn’t drink and the only vice he had was that he saved up his money and bought a new pair of boots every couple of weeks – and sold his old ones to his mates at knockdown prices!”

“He is a special person, and was one of the most popular in the dressing-room. He is a very quiet individual who focused on his career and nothing else, and was very respectful to his teammates and to the staff.”

“One of the first things he did when he got his move to Sunderland was he bought two of his old teammates cars, because they were his friends, and he bought his mother and father a house. He’s very proud of his Creggan roots.”

“He has one thing that you can’t put into anyone – an undeniable hunger to be the best possible player he can be, so in my view he’s only going to get better. All he needs is a manager who believes in him. Give him that, and James won’t be found wanting.”

In Irish manager Martin O’Neill, McClean has someone who believes in him. It was O’Neill, when he was manager at Sunderland, who gave him his debut in the Premier League.

O’Neill, a Catholic from the Co Derry village of Kilrea, is well placed to bring the best out of his Derry City neighbour.