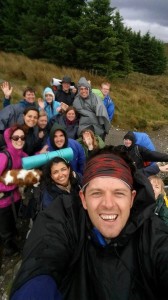 Sixty-five young people have come to Ireland from around the world to enrich their faith and work in justice and ecology projects.

The 10-day Magis 2014 event, run by the Jesuits, started on 7 August with an introduction at Gonzaga College, Dublin on faith formation, prayer and reflection.

“There are young people from 18 nationalities. So they are enjoying the international aspect of it and living in a community together,” Niall Leahy SJ, one of the coordinators, told CatholicIreland.net.

“Each pilgrim has their own questions. Some are seeking faith, and others might be asking ‘what will I do with my life?’”

He explained that Jesuits and the Handmaidens of the Sacred Heart are there to support the young people.

There are 4-5 leaders in each group and the days together are inspired by the spirituality of Ignatius of Loyola.

This week the young people have begun the ‘action’ part of the event with two walking pilgrimages, a social action and an ecology project.

The pilgrims in Galway and the West (Croagh Patrick) and those trekking the Wicklow way to Glendalough are not only experiencing the rugged countryside but also some less than clement weather.

When the Glendalough pilgrimage ran into a thunder storm they recalled that day’s Gospel about Jesus calming the storm.

“That (the real storm) brought it to life, and the group also grows together when facing adversity,” Niall Leahy explained.

When people are walking, they talk and this pilgrimage is a ‘safe place’ to talk about faith.

There are fewer opportunities to do this in Ireland which is becoming secular, and there are even less for the young people from other European countries which have been more secular for longer, so they welcome an opportunity to talk about faith according to Niall Leahy. 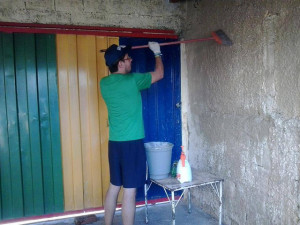 Painting at a homeless shelter

The social group is working at the Cope homeless shelter in Galway.

In Wicklow, a group is working on an ecology project.

Others have volunteered for training as ‘journalists’ and film-makers.

As well as blogging, tweeting, photographing and Facebook, they are filming the ventures on their phones.

This is part of a unique experiment under the guidance of Professor Graham Roberts of the media department in Leeds Trinity University.

He’s on the Magis 2014 team and has developed special software to allow the filmed material be edited and tagged by the participants.

Collectively, they will produce an interactive film of the whole Magis 2014 experience.

Niall Leahy explained that the groups of young adults from England, Ireland France, and Belgium the US and many other countries will find that these ventures challenge them to put their faith into action.

“They’re working and praying together and have, even in a week, built a new community that’s going around Ireland and helping out where needed. Belief is not just about the head it’s about the heart and the hands. And it’s about doing it with others.” 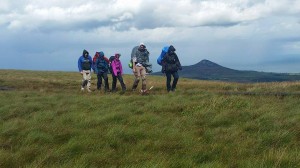 The event is known as the ‘Magis’ ( meaning ‘more’) project and its part of the Jesuit outreach to young adults.

It takes place every two years in different places, and Magis 2012 was a big part of World Youth Day in Madrid.