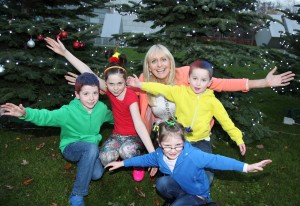 Pic shows Miriam O’Callaghan with Jack Kelly, Amanda Brown, Sophie Warren and Darren Kelly – just some of the children who will be takng part in Mad Hair Day on 12 December to raise money to provide vaccines for babies in the developing world. Pic John Mc Elroy.

The shocking reality of children living in a cemetery in the Philippines has prompted an Irish charity to call for a nationwide drive to help them.

‘Children Helping Children’, the mission initiative that involves Irish children helping children in developing countries, is hoping that there will be a generous response to its fundraising appeal.

National Secretary of the Society of Missionary Children, Jackie Pallas, travelled to the Philippines and saw for herself the conditions in which the children live.

“The reality of seeing children and their families living amongst the dead is an image that is very hard to forget. Almost 2,000 people who have nothing live in the cemetery in Manila; they are born, live and die there,” Jackie Pallas recalled.

“It is desperate and really heartbreaking to see human beings living in such an environment. We met two amazing Columban missionary sisters who are doing Trojan work for the people there but they need help. They run child feeding programmes, they are educating the children and giving them something to live and hope for.”

“They have a lovely little centre, the Mosaic Centre, where they bring the children to have time away from the cemetery where they can learn, have a bit of fun and just be, and they are currently desperate to expand this centre.”

She explained that on foot of this the charity has decided to concentrate its ‘Mad Hair Day’ fundraising efforts on this project.

Each December Irish children always get involved in our ‘Mad Hair Day’ fundraiser where they pay a fine in school for their crazy ‘hair do’ and these ‘fines’ raise funds for a charity.

‘Mad Hair Day’ takes place in schools throughout the country on 12 December and is one of the most anticipated days in the school calendar. Children pay 50 cent for the privilege and teachers often join in too.

“We are so lucky that the teachers and schools in Ireland really get behind us and they support our efforts. Every year we hold our National Day of Prayer for Children, this year it takes place on the 9 October,” Jackie Pallas said.

“On this day we ask Irish children to pray together for each other and children around the world, if they can share some of their pocket money on the day we are always grateful.”

“The money raised by Irish children goes a long way in developing countries, it stretches like elastic and it will go a long way towards this mission in Manila.”

According to Jackie Pallas, “It crosses the divide. Missionary Children is there to help children of all religions and none, we don’t make distinctions; we give to all children in need and it means so much to them.”

“We have received so much support and help from teachers and schools right around the country and for this I am so grateful. We couldn’t do it without them.”