Loyola Institute explores role of theology in the university 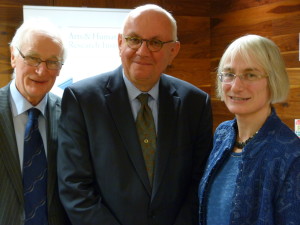 The Director of the new Catholic Institute of Theology at Trinity College Dublin has said it aims to make a serious academic contribution to the development of theology in Ireland.

Dr Con Casey of the Loyola Institute was speaking to CatholicIreland.net following a lecture on ‘Pluralistic Challenges and University Theologies’.

It was given by Professor Peter Strohschneider of the University of Munich, who is Head of the German Research Council.

In his lecture, Professor Strohschneider warned that the challenges associated with religious pluralism in society today call for “a high level of religious education”.

He warned that in modern societies this is not attainable “without theologies that are integrated into universities and academically held accountable.”

Speaking afterwards, Dr Casey explained that the Loyola Institute had become “aware of the importance of the German study of theology in the state universities” and invited Professor Strohschneider to address the topic in Ireland.

He described Professor Strohschneider as perhaps “the most influential person” who had shaped scholarly endeavours at the university in Germany over the last 10 years and he explained that the German Research Council had just completed a review of the funding of theology in state universities.

The lecture was followed by a round table discussion on ‘Theology in the Modern University – its contributions and its challenges’ which saw contributions from the Loyola Institute’s three academic consultants – Professor Terrence Merrigan of Leuven, Professor Lisa Sowle Cahill of Boston College and Professor Thomas Tobin of Loyola University in Chicago.

All three are currently acting as an advisory group to the Institute which is dedicated to teaching and research in the Catholic tradition. It was established by a trust of eight religious orders.

Asked what the lecture had to say regarding theology in public universities as opposed to seminaries, Professor Casey told CatholicIreland.net that its central argument was that in contemporary society – be it Germany or Ireland – there already exists a pluralism of religion.

“Everyone who has an interest in religion has to live with that pluralism and can no longer live as if there is a homogenous single faith that you are living out of,” he said.

The Redemptorist academic noted that the German Research Council was arguing that “pluralism needs to be articulated academically and that the university is the place to do that because it is where many academic disciplines interact.”

“Living through a culture of ambiguity academically and institutionally is what the German Council for Academic Research has recommended. These days you can’t simply be confessional, you have to be pluralistic,” he said.

Asked about the perceived tensions around establishment of Loyola Institute, specifically Archbishop Diarmuid Martin’s comments about its degrees not being recognised for those seeking to undertake ministry, Professor Casey rejected that there was any tension.

The Director of the Loyola Institute added, “Canonically religious congregations can only take an education initiative of this kind if they have a sign off by the local archbishop and in this case it was Archbishop Diarmuid Martin who actually had a great interest in the project.”

He explained that the Loyola Institute initiative was not taken by the Archbishop or the archdiocese but rather by a trust of eight different religious congregations.

“It is of course the case, as the Archbishop said in remarks around the time of the launch, that this is not an institute for training for church ministry – it is an institute for the academic exploration through research and thinking – of theology in the catholic tradition, pursuing the questions that need to be pursued academically today.”

He added, “It is our hope that it will become an institute of serious service both to society and the church.”

In his lecture, Professor Peter Strohschneider warned that theology must not be reduced to religious studies. In academic theology it is important to maintain a culture of ambiguity, he said.

Religion, he said, “is by no means losing importance. It is, however, undergoing profound change; in many places it is losing uniformity.”

The German academic described modern societies as “characterised by growing religious pluralism.” He said this was “especially true of German society, where, 500 years ago, during the Reformation and the process of confessionalisation, a manner of dealing with religious pluralism developed that left its mark on the history of Christianity.”

Borrowing a term used by Islamic scholar, Thomas Bauer, from the University of Münster, Professor Strohschneider said religiously pluralised and pluralising societies perpetually confront believers with the imposition of having to maintain a culture of ambiguity – paradoxically in those very areas where clarity and certainty are sought.

Referring to recommendations made by the German Research Council, he noted that the first guideline calls for an integral establishment of religious studies at public universities.

“This pertains not only to self-reflective denominational theologies but also to scholarly external observation of religion; it also includes systematic, historical-hermeneutic and sociological-empirical disciplines.”

The Council’s second recommendation calls for adequate recognition for the pluralisation of religious affiliations and religions in German society and reflected in the academic system.

The theologies of non-Christian religious communities should be given equal status in religious studies.

In concrete terms, this means that theological Jewish and Islamic Studies must be anchored in universities across the full spectrum of these disciplines.