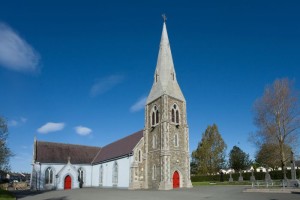 The parish priest of Dunleer in Co Louth has said local people are angry following last week’s incident at the local church which saw a camera used to stream Mass live to house-bound and ill parishioners stolen from the church.

The theft happened in broad daylight around 3pm on Wednesday 11 November when a couple travelling in a UK registered silver BMW entered St Brigid’s church in Dunleer.

The man who is described as being in his late twenties or early thirties with dark hair and glasses was captured on cctv taking the camera from the top of the church while the woman stood at the back of the church.

The incident lasted about five minutes before the thieves made off in the direction of the border.

St Brigid’s church had used the hi-tech camera to stream masses every Sunday at 11:30am and Saturday at 7:30pm as well as weekdays.

Speaking about the incident Fr Michael Murtagh said  that the church has only reopened during the day time in the last four years.

He added, “Thankfully most people are very respectful so that is what makes it all the more shocking when somebody comes into the church with a view to stealing and to making off with a resource which is there for the most vulnerable.”

Anyone who spotted the car or the couple or who has any information is asked to contact Dunleer Garda Station at (041) 6851 202.