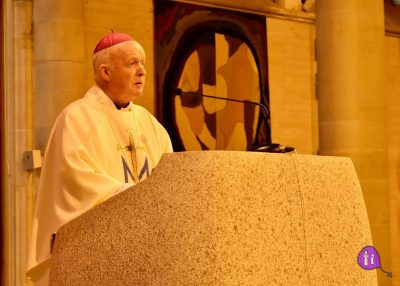 Clogher’s virtual Lourdes pilgrimage took place in homes and parishes around the diocese on the very days pilgrims had intended to be in Lourdes this year but were prevented by the Covid-19 pandemic.

Over the six days of the virtual pilgrimage, 3-8 July, a dedicated website was accessed nearly 12,000 times and attracted participants from places as diverse as Australia, the USA, Kuwait and Trinidad & Tobago, according to Dr Gary Carville, spokesman for Clogher diocese.

A decision was taken to find a new way of joining pilgrims together in prayer following the cancellation of the visit to the Marian Shrine in southwest France over concerns about the Covid-19 pandemic.

The virtual pilgrimage, with a tagline #Lourdes2Clogher, was held via a dedicated website www.lourdes2clogher.com and services were broadcast also on the Diocese of Clogher’s Facebook page.

A number of parishes across the diocese acted as venues for the various Masses and devotions of the virtual pilgrimage.

The Opening Mass on 3 July took as its theme ‘I am the Immaculate Conception’. The Mass was celebrated in St Macartan’s Cathedral, Monaghan by Bishop Larry Duffy, assisted by Canon Noel McGahan and Fr Leo Creelman. Members of the Lourdes pilgrimage staff attended too.

The livestream of this Mass on Facebook alone reached over 11,000 people.

In his homily for the opening Mass, Bishop Duffy described Lourdes as “a unique place gifted to us by God”. He noted that it was in Lourdes in 1858 that Mary, the Mother of God, appeared to St Bernadette, a 14 year old local girl.

During one of the apparitions Mary asked Bernadette to invite priests to gather people there and to build a chapel. Mary’s wish has been carried out over the last 150 years.

“St Bernadette described Mary as a beautiful lady, who when asked her name said, ‘I am the Immaculate Conception’- a dogma that had been promulgated four years earlier which stated that Mary was conceived without sin.”

Elsewhere in his homily, Bishop Duffy described Mary is “the ideal disciple of Christ, his constant companion”.

“She is the one filled with the Holy Spirit – full of grace, humble and holy, she directs us to Christ. ‘Do whatever he tells you’, she says. She is the mother who reaches out to us when we need help or assistance – just as she did at Cana.” 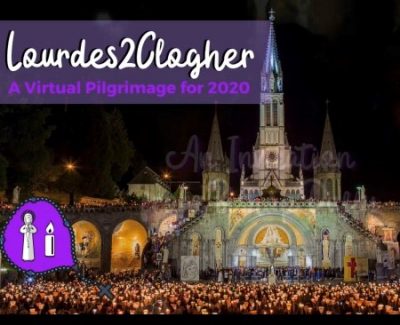 According to Gary Carville, there were a number of challenges in organising the virtual Torchlight Procession and the Way of the Cross but that the organisers were able to successfully overcome these.

“A call went out for people across the diocese to pray and record the Rosary. These were brought together online. The result was manifest in the range of voices, the range of people and age groups and the leadership of Bishop Larry who led the procession and the Rosary from the Cathedral. Similarly, the Way of the Cross and the Holy Hour from Enniskillen, the Mass of the Sick from Clogher and the Masses from Carrickmacross, Lisnaskea and Castleblayney were prayerful and uplifting.”

The closing Mass of the virtual pilgrimage was celebrated by Monsignor La Flynn and the pilgrimage’s spiritual director, Canon Noel McGahan in St Mary’s Pettigo, the parish of Lough Derg.

“Thus, was highlighted the link of places of pilgrimage and how our entire life journey is a pilgrimage to God and with God, to Jesus through Mary,” Gary Carville said.

He added, “The response to the virtual pilgrimage was phenomenal. Over the six days of our virtual pilgrimage the website was accessed nearly 12,000 times. A core group of about 2,100 accessed the website more than four times over these days. Statistics from webcam providers (for the parishes where Masses were celebrated) show figures of between 1,600 and 2,500 views from all over Ireland and the UK, but also from places as diverse as Australia, the USA, Kuwait and Trinidad and Tobago.”

The Facebook livestream of the Opening Mass reached 11,300 people, the Virtual Torchlight Procession reached 5,300 and the Way of the Cross reached 3,300. Overall, the posts concerning the pilgrimage itself reached over 24,000 users on Facebook, explained Gary Carville.

He said the sub-committee that organised the virtual pilgrimage has met online to look at other possibilities for the ‘digital diocese’ in terms of making the Lourdes experience real for people.

“Of course, nothing can beat the lived experience of being at Lourdes, to experience the prayer and the sense of healing within the community, the family of Lourdes. We hope and pray that in 2021 we will be able to resume our journeys to Lourdes.”