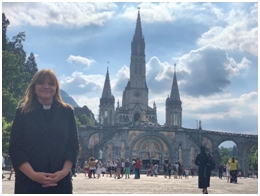 The Marian shrine of Lourdes in the south of France features in this afternoon’s Songs of Praise programme.

The programme, which airs at 1.15pm today on BBC1, was recorded earlier this year, well before last fortnight’s Dublin Diocesan pilgrimage to Lourdes. Instead, the shows presenter, the Rev Kate Bottley, spends time with 500 pilgrims from the Catholic Diocese of Leeds.

Although Rev Bottley is an Anglican vicar, she visited Lourdes, where Our Lady appeared to St Bernadette in 1858, with her parents as an 8-year-old child.

“We took home with us a bottle of Lourdes water which my mum kept in her bedroom drawer,” said Rev Bottley, who became a TV celebrity following her appearance in the reality show Gogglebox.

“Whenever I was feeling sad I would go and have a little sip, and as the bottle got low I topped it up from the bathroom tap! Sorry mum! But it always made me feel better.”

Today, Lourdes attracts some five million visitors a year and is the third most visited Catholic place of pilgrimage after Rome and Guadeloupe. Every year about 100 people claim to be miraculously cured while visiting the shrine.

In tonight’s programme Rev Bottley talks to 71-year-old Kazik Stepan from Kent, who believes he was miraculously healed in Lourdes in 1965, when he was aged 18 and terminally ill because of an inoperable tumour in his spinal cord.

The day he arrived in Lourdes, he was taken to bathe in the shrine’s waters. Afterwards, when he returned to the hospital where he was staying, he was able to walk for the first time in months. Mr Stepan believes the date of his cure, 8th September, is significant as that is the birthday of Our Lady.

“On a birthday you always give presents to someone,” said Mr Stepan. “In this case, she gave me the present of life.”

Rev Bottley also talks in the programme to Dr Alessandro de Franciscis, chairman of the International Medical Committee of Lourdes, which decides if particular cures are unexplainable and, therefore, miraculous. The 30-person committee, made up of eminent medical personnel from around the world, is currently reviewing Kazik Stepan’s case and is due to issue a decision on his claims this October.

If they decide the evidence indicates an unexplainable cure, Mr Stepan could become the first British person to have officially experienced a miraculous healing at Lourdes.

Rev Bottley also took the plunge in the shrine’s waters and said afterwards: “It’s safe to say that that was a pretty emotional thing that we’ve just done. It’s something I’ll never forget.”

Songs of Praise was first broadcast in October 1961 and is one of the world’s longest running television programmes.