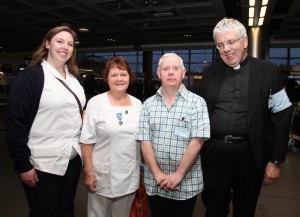 For the 66th year, the Dublin Diocesan Pilgrimage to Lourdes got underway on Monday as 2,000 people boarded seven specially chartered flights from Dublin Airport for the French shrine.

From 5am in the morning, flights began leaving Dublin bringing the 175 sick pilgrims, 52 volunteer nurses, 8 doctors, 560 volunteer helpers and 300 young people and students as well as parish groups.

The pastoral theme of this year’s pilgrimage is ‘The Joy of Mission’.

Speaking ahead of the pilgrimage, the Archbishop said the pilgrimage was extraordinary in how it could bring together so many and impress so many, “from strong believers to the plain curious, and even perhaps the cynical.”

He will celebrate the opening Mass at the grotto with the entire group this morning.

Pilgrimage director, Fr Martin Noone, said that all involved with the pilgrimage were greatly encouraged this year by an increase in interest in Lourdes, particularly from parishes and schools.

“The fact that 300 students and young people have signed up for this pilgrimage is really heartening to all involved and gives us hope for the next 66 years.”

The parish priest added that in his experience almost every young person who joined in the pilgrimage over the years was positively influenced by that experience – with many continuing to take part into adulthood – and even old age.

“The connections forged between young people, working as helpers, and the sick and elderly is always a joyful experience for both – the older pilgrims interact with a generation which may be unfamiliar to many of them, while the young people leave with a sense of what is important and of value in life – health, hope and the sense of fulfilment that comes from going beyond ourselves and reaching out to those who need us.”

The Dublin cohort of volunteers is made of up nurses, doctors, handmaids, brancadiers, secondary school students and voluntary helpers.

Eighteen Dublin parishes travel in their parish groups. 130 students from 22 secondary schools across the Diocese are taking part. 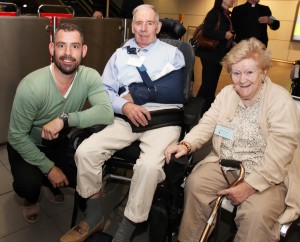 Music for the pilgrimage will be led by the Dublin Lourdes choir, which has recently recorded and produced new music for the 2015 Pilgrimage.

Throughout the pilgrimage students taking part will blog about their experience.

The director of nursing for the pilgrimage is Rosaleen O’Malley who works in the Emergency Department at Connolly Hospital in Blanchardstown.

This is her 14th year taking part in the pilgrimage. All the medical staff do it on a voluntary basis and take annual leave to be there.

She explained that many of the sick pilgrims would not be able to travel without the medical backup provided by the pilgrimage team.

A group of theology students from Notre Dame University in the USA is among the 300 young people volunteering this year according to Fr Martin Noone.

Fifth year student Neil Moore from Ardscoil Rís in Marino was helping to pack bags and luggage for pilgrims on Monday. Though he is not travelling this year, he said “next year will be my chance to go”.

Though Lourdes is a religious shrine, the teen said he was looking forward to it. “All the sixth years from the school say it is a very good trip and the teacher has told us that some of those who have gone in sixth year continue to go after they’ve finished school – it means so much to them.”