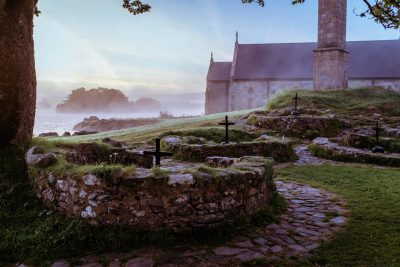 No smartphones or designer trainers and having the holistic experience sounds more like yoga or mindfulness than what was once known as St Patrick’s Purgatory, but they all feature in a new TV documentary.

The first episode of Oilithreacht (Pilgrimage) aired on BBC NI on Monday night (25 March 2019), telling how the very traditional pilgrimage to Lough Derg is lived by many today.

Speaking of the Lough Derg practice of walking barefoot around the ‘beds’ and praying the Our Father and Hail Mary many times, Fr Seamus Quinn said: “There are people who say this is crazy, and others say that it is not about the individual words of the Our Father but it is about the holistic experience. As you say these prayers you keep your mind occupied. If it all goes to plan a more profound experience will emerge.”

The film follows the story of several pilgrims arriving on Lough Derg, which has in the past been most associated with fasting and penance. The participants will share more of their experience in the next two episodes. The documentary comes in two episodes for RTÉ One and the first of these will air on Easter Monday.

“I think it will surprise people who do not know a lot about Lough Derg especially in a changing Ireland which people consider is becoming more secular and then that equals fewer young people in the Church. But that was not our experience in Lough Derg,” Órfhlaith Ní Chearnaigh, producer, told CatholicIreland.net.

The documentary also reflects on how the pilgrimage to Lough Derg has seen reduced numbers in recent years yet still manages to reach out to those seeking some time out from the stresses and pressures of contemporary living or a ‘detox’ from the modern world.

During the first episode, one young woman takes off her shoes, walks barefoot around the island and kneels on the bare stones, saying: “Bhí sé cruel” (in mixed Irish and English “it was cruel”). “I never thought of the physical aspect, and it is physically very challenging, especially on your knees,” she added.

Another young woman said she expected the experience would help reflect on “yourself and life and the bigger questions”. One of two younger teenagers who are visiting together spoke of how her mother had been twice and her father once and found it difficult to believe that their daughter wanted to go to Lough Derg.

A man who had been several times spoke of the special atmosphere of the place. Another who went first in 1976 said he feels close to God on Lough Derg. 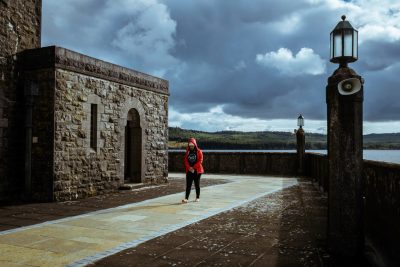 Órfhlaith Ní Chearnaigh, producer at DoubleBand Films, which made the programme for RTÉ and BBC, told CatholicIreland.net that public reaction to the documentary had been good as the first episode aired. The team at Lough Derg was also pleased at the tone, which was in keeping with the ambiance of the island.

“It wasn’t going to be something very fast moving, pacy and sensational,” she said. Rather it was “reflective and considered.”

Many people go in thanksgiving for blessings that they have had but also for sadder reasons. One pilgrim filmed is looking for answers, explained Órfhlaith Ní Chearnaigh, and the programme follows whether she finds them or not on the island.

The documentary was filmed during the summer of 2018 with a small ‘embedded’ film crew and with the cooperation of the authorities in Lough Derg. While the crew aimed to be discreet and not disturb pilgrims, some pilgrims volunteered to be interviewed on the spot and others had been picked earlier by researchers and were followed through their journey on the island.

The Irish language programme with English subtitles was made by DoubleBand Films with support from Northern Ireland Screen’s Irish Language Broadcast Fund. Oilithreacht (Pilgrimage) is on BBC NI on Monday nights 25 March and 1 and 8 April 2019.

It airs on RTÉ One TV on Easter Monday – details to be released. See https://www.doublebandfilms.com/.