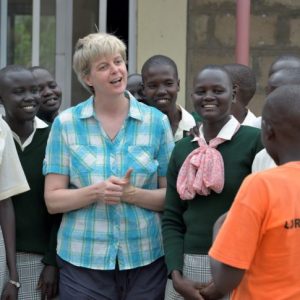 A Loreto Sister in South Sudan has been named as this year’s recipient of the Hugh O’Flaherty International Humanitarian Award.

Sr Orla Treacy lived in Tralee as a young child before her family moved to Bray in Co. Wicklow, and she was professed a nun in 2005. Sr Orla is now the Principal of Loreto Secondary School in Rumbek in Lakes State in South Sudan.

This is the tenth year of the memorial commemoration of the Monsignor, organised to raise awareness of his humanitarian work during World War II, when he and his colleagues in the Rome Escape Line saved over 6,500 people from the clutches of the Nazis who had occupied Rome at the time. Sr Orla was nominated by Martin Rosney from Bray, Co. Wicklow.

Sr Orla was born in 1973 and she moved with her family at the age of two to Tralee, where her father Blaise Treacy took up the position of Kerry County Secretary. She was educated at Presentation Convent, Tralee until the age of six, when her family moved to Bray, Co. Wicklow, where she attended Loreto in Bray, completing her Leaving Cert in 1991.

After spending a summer in India with the Loreto Sisters, at the age of 24 she decided to join the Order. Based at the Loreto Convent in Rathfarnham, she was professed as a Loreto Sister in September 2005. Within a year, she headed to the large African state of Sudan with four other Loreto nuns to establish a mission in a diocese the size of Italy but with just two secondary schools.

She has spent the past 11 years in Sudan, experiencing the trauma of South Sudan becoming an autonomous independent state in 2011 followed by civil war in 2013. Today, South Sudan is widely considered one of the most fragile states in the world, with continuing conflict and unrest.

Speaking this week, the chairperson of the Hugh O’Flaherty Memorial Committee, Jerry O’Grady, said, “Sr Orla possesses and displays the bravery and humanitarian commitment we have come to associate with the recipients of this Award. At a young age and with a bright future ahead of her in Ireland, she decided instead to dedicate her life to those in need in what was already then a virtual war zone.”

Sr Orla will be presented with the award by Cathaoirleach of Killarney Municipal District Niall Kelleher at a ceremony in the Killarney Avenue Hotel on the evening of 4 November.