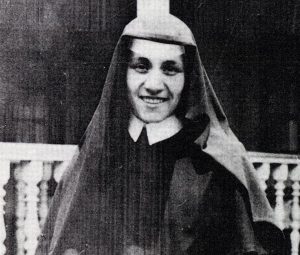 Mother Teresa of Calcutta as a Loreto nun in India.

More than 100,000 people are expected to gather in St Peter’s Square on Sunday for the canonisation of Blessed Teresa of Kolkata.

She joined the Loreto Order and lived in Ireland for a few months until she was sent to India in 1929.

There, she worked with the ‘poorest of the poor’, a vocation that led her to found her own order, the Missionaries of Charity, in 1950, in Kolkata.

She was awarded the Nobel Peace Prize for her work in 1979.

At the press conference at the Vatican on Friday, the man who was healed by the miracle that qualified Mother Teresa for canonisation told reporters that he does not consider himself special.

“Maybe it was me this time, but maybe tomorrow it will be someone else,” said Marcillio Haddad Andrino, who was inexplicably healed of a deadly brain infection. “The merciful Lord looks at us all without distinction.”

On Sunday 4 September, Mother Teresa of Calcutta will be canonised by Pope Francis in a ceremony in St Peter’s Square, Rome. This is a very special occasion for us Loretos, as we celebrate the sainthood of one who journeyed with us for 20 years as a Loreto Sister.

Shortly afterwards she set sail for India with two other postulants. She entered the Novitiate in Loreto Darjeeling and after her Profession of Vows was missioned to Loreto Convent Entally (in Calcutta) where she taught Catechism and Geography for many years prior to her appointment as Principal there.

On a train journey to Darjeeling for her annual retreat in September 1946, Mother Teresa heard God’s call to go out into the slums of Calcutta to serve him in the poorest of the poor.

She wrote about this to Mother Gertrude Kennedy, the Superior General in Rathfarnham, who respected her request and supported her in her search for God’s call to this new mission.

So having received the necessary permissions from her Superiors and the Archbishop of Calcutta, Mother Teresa answered this ‘second call’ to go out into the slums of Calcutta, to live among and serve the poorest of the poor.

All through her life Mother Teresa’s ties and friendship with Loreto remained strong, and she was personally known to many of our Sisters, especially in India.

She frequently visited Loreto communities, particularly in Calcutta, and many of the orphaned babies she had rescued ended up going to school in Loreto Entally where Mother Teresa herself had taught!

We have very happy memories of Mother Teresa’s visit to Loreto Abbey Rathfarnham in 1993.

Those who knew Mother Teresa during her years in Loreto found her a cheerful, happy companion with a quick sense of humour. She was energetic, resourceful and hard-working, but above all she was a woman of deep faith and prayer.

On the 150th anniversary of Loreto’s foundation in India, Mother Teresa wrote that “Although now I am a Missionary of Charity, deep down that Loreto joy is still there. Nothing can separate me from the love and gratitude I have for Loreto; what I have received will never be forgotten.”

We are honoured that Mother Teresa requested to be buried from our convent Chapel in Calcutta when she departed this earth on 5 September 1997.

To quote Sr Noelle Corscadden, Loreto Institute Leader, “Her life challenges each of us to live with our eyes and our hearts fixed on those who are small in our society, those whom society rejects and forgets.”

We thank God for the gift of Mother Teresa to the Church and to the world. We rejoice with her Missionaries of Charity on the occasion of her canonisation and we pray that her witness and the great legacy she has left us will continue to bear fruit in years to come.

More on Mother Teresa’s connections with the Loreto Order can be read here: http://www.ibvm.org/wp-content/uploads/2016/09/Mother-Teresa-Booklet-online-viewing-version.pdf