Longing for a new Pentecost

Archbishop Eamon Martin says he longs for “a New Pentecost in Ireland”, a fresh outpouring of the Holy Spirit to transform and renew the faith in this country.

The Archbishop was speaking at the Summit ’17 Conference in Croke Park, organised by FOCUS, the Fellowship of Catholic University Students, founded as a pilot programme at a Benedictine College in Kansas in 1998 and now active in more than 110 university campuses across 36 states in the US.

As part of its mission, FOCUS trains graduates and undergraduates in Church teaching, prayer, scripture, evangelisation and discipleship, and then asks them to work as missionaries at third level institutions, usually serving for a two-year period.

In the US, FOCUS has more than 450 students working alongside university chaplains, more than 7,000 students attend its conferences each year, and currently it is sending 1,000 young Americans on overseas missions to spread the Good News.

Speaking to the Dublin conference, Archbishop Martin said that the Day of Pentecost some 2,000 years ago was not “a once-off”; rather, he said: “The Holy Spirit has remained as the driving force of the Church’s missionary outreach down the centuries. But the power of the Spirit can sometimes lie dormant within us, awaiting the spark that will trigger the explosion of ‘a new Pentecost’, ‘a new springtime’ for faith and friendship with Jesus.

“I have already noticed the shoots of this new springtime in so many people and places across Ireland – quiet faith initiatives, sometimes small and sporadic, with more and more people finding within themselves the courage to say ‘Yes’ to God’s will for them.”

The Archbishop said there was nothing new about his call for “a new Pentecost”– Pope Saint John XXIII prophesised a new Pentecost at the Second Vatican Council: “He saw it as the fruit of the Council, a new outpouring of the Holy Spirit like a great tsunami of divine love!”

Addressing the young men and women before him, Dr Martin said: “Brothers and sisters, it is easy to point to forces today that may be hostile to faith; some go so far as to say the Church in Ireland is near to collapse. Like many believers in the Western world, we have to contend with a society where Gospel values are often under threat or even attack. At times we can feel a little like those in Ephesus who did not even realise there was a Holy Spirit, alive and active, pouring out His gifts, driving forward the Church’s mission. 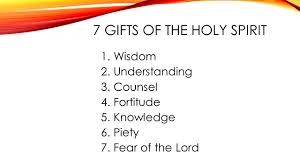 “I am convinced that the Spirit is actively at work in Ireland today preparing us for a new springtime of growth and abundance in faith. But this will only flourish if we are alert and open to the Spirit’s calling and gifting of many people for the service of the Gospel in this time and in this place.

“The mission and challenge that we share as lay faithful, religious and priests, is to speak faith, hope and love into a world that is darkened by violence, war, greed and despair; a world that is divided more than ever into those who have and those who have not. Into this world the Spirit anoints us, gifts us, sends us out to renew the face of Earth.”