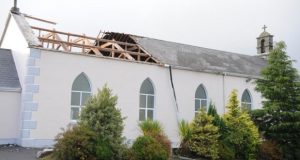 Locals in a County Cork parish have vowed to repair their local church after it was devastated by Storm Orphelia.

The small community of Kilcorney in north Cork, are coming to terms with the fact Christmas ceremonies will likely have to be celebrated in the local community centre rather than Kilcorney Church.

Storm Ophelia hit St Nicholas’ Church in the village of Kilcorney, near Millstreet, between 1pm and 2pm, lifting off a third of the roof. There were no injuries. On Tuesday, a local contractor erected scaffolding. The plan is to seal the ceiling to prevent further damage to the church, which dates back to 1858.

Speaking to RTE, Pat Sheehan from Kilcorney NS Board of Management explained that ‘’there was damage done to the church and about one third of the roof had gone up from the altar.. Thankfully it blew out and didn’t damage the inside of the church. It just lifted off.  There is water on the ceiling of the roof due to the rain and this has caused damage as well’’. He added, ‘’We are lucky we have a community centre and a social centre to hold Masses, and this is what we will do from now on as there is no chance that the roof will be fixed for Christmas. Thankfully the flying roof did not do any damage locally. There was a lot of debris near the school. It is insured by Church and General and this will cover the majority of the costs.

His words were echoed by Parish Priest, Fr William Winter. Speaking to the Irish Times he confirmed that the community will not move to sister churches, St Joseph’s in Lyre and St Fursey’s in Banteer. “We won’t allow the storm to stop us,” Fr Winter said. He added that he is very anxious to keep church life in the community going. According to locals, the church and school are central to community life in Kilcorney. Sunday and other Masses are to be held in the village hall so that parish life can continue until their church is repaired.