Home > News > Live crib a reminder of why Christmas celebrated

Live crib a reminder of why Christmas celebrated 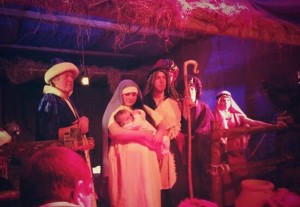 An Beithilín Beo – the Live Crib

An Beithilín Beo – the Live Crib – involving over fifty people as well as an array of farm animals will be performed eleven times this weekend in the Dublin suburb of Clondalkin.

The Live Crib is the product of a huge community effort in Clondalkin and brings the magic of the story of Christmas to life in a way nothing else can, according to one of its organisers.

It will be held in the Irish Cultural Centre over the weekend and over 1,000 people will throng the venue to see the story of the Nativity brought to life, with six newborn babies lined up to play the infant Jesus over its eleven shows.

Last night, Minister Francis Fitzgerald officially opened the performance which is in its tenth year.

“We began the Beithilín Beo – the Live Crib – at the height of the Celtic Tiger,” explained Brían Ó Gáibhín who manages the centre.

“We wanted people to relax and remember why they celebrate this time of year,” he said.

They are brought through the Georgian house to a large hall where with other people in costume, sitting on bales of hay, they experience the Nativity story.

“It is hard to describe. The Beithilín Beo takes you back to where we want to take you – to Bethlehem,” Brían Ó Gáibhín told CatholicIreland.net.

There is no talk during the show which lasts 40 minutes. Instead, the event is a series of carefully choreographed scenes set to music.

After each show, children are invited to quietly enter the life-sized crib and interact with the animals – the goats, geese, hens and chickens, donkey, calf, sheep and pony.

Within an hour, the audience leaves the stable to enjoy refreshments nearby, and a new cast takes over the roles of shepherds, kings and the Holy Family and the event is re-enacted. 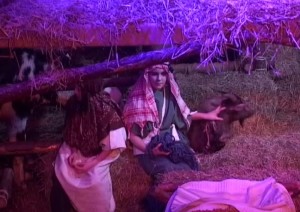 An Beithilín Beo – the Live Crib

Brían Ó Gáibhín has been involved with the Beithilín Beo since it began.

Logistically it is a big challenge, he explains, between collecting the animals, putting up sets and lighting and providing all the crews and cast for the eleven shows.

The centre is much in use so the show has to be dismantled very quickly after the weekend.

It costs a lot to stage but there is no entry charge or charge for the refreshments.

“We decided never to create a barrier to people coming in.”

Patrons may, however, make donations on the way out and ‘tax collectors’ are strategically positioned as they leave to accept any donations.

Around a hundred people may attend each performance and they have no problem at all filling the main hall. The event is publicised in local churches, but generally they don’t advertise much.

“We don’t like to disappoint people, so we keep it low-key so everyone gets in. There is absolutely nothing like this out there. You are transported back. You don’t have to tell the children to stay quiet or the adults to turn off their mobile phones – they do it automatically.”