The Priests lend their support to ‘Living Church’ Congress 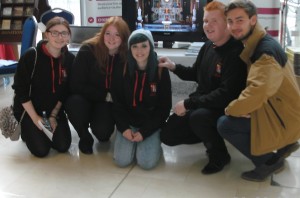 “A major event” was how Fr Eugene O’Hagan from the renowned singing group The Priests described the Down and Connor Congress which he attended and sang at on Saturday.

“It has been in the diary for well over a year,” Fr Eugene told CatholicIreland.net “This has been a major event in the history of the church here,” he added.

“There has been a lot of preparation and lots of people have been encouraged to attend and they have all stepped up to the plate. It has been very, very, invigorating. It is a real sign of hope for the church,” he said.

At the congress, Bishop Noel Treanor introduced the new pastoral plan for the diocese.

The congress and pastoral plan were three years in the making. They incorporate the views of some 3,000 people who were involved in an extensive consultation all over the diocese.

Former NI police ombudsman, Baroness Nuala O’Loan, was involved in the preparations. “I was involved in the Living Church initiative from the beginning, and part of the final group that wrote the pastoral plan for the diocese. So there were three bishops, a group of lay people and a number of priests,” she said.

“3,000 attended meetings and we tried to take from that a greater synthesis of what people actually want for the church of the future. Then as a small group we wrote that into something we could measure and achieve and know what we had done and when we had done it.  It was a great process, very hard work, very challenging, but great” she said.

Congresses such as Living Church in Down and Connor come at a vital moment for the church in Ireland and are a great opportunity according to Irish Times columnist Breda O’Brien who was keynote speaker at the event.

“I think there will be more and more initiatives like this. Already I have had the privilege of attending several congresses of this nature and it is not the congress itself but what happens afterwards and the people who attend and go back to their parishes with a bit of fire and enthusiasm,” she told CatholicIreland.net

She said the message is simple, it is about the living of the gospel in families and parishes.

“It is a really vital thing to do. People are already doing it in ways and it is about just finding these bright spots where things are happening and transferring those to other parishes – being willing to try things and being willing to get things wrong. This is a vital moment for the church and a great opportunity,” she said.

For young people and teens, she said involvement is key and she coined the phrase to give them the chance to “help out and to hang out together.” 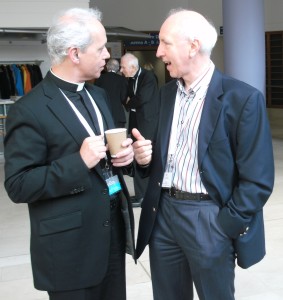 Fr Eugene O’Hagan of The Priests talking to Tony Bolger of CatholicIreland.net and Church Services TV

There were a good number of young people at the Congress and the Clonard Youthreach group (see picture) performed the opening dance.

Nils Busekros from Cologne in Germany was happy to be part of the group and Edel Finn spoke about how young people like activities so they love expressing the liturgy through dance.

Lay people were very much involved in the event and a special ‘Apostolate of Eucharistic Adoration’ group set up in the diocese provided a quiet prayer space during the congress.

One of the group, Anne Marie McNeill spoke of how hours of adoration before the Blessed Sacrament helped her and her family find peace when her daughter Fiona who was disabled, died in tragic circumstances. Anne Marie is also very active in the Charismatic prayer group in Randalstown.

Many members of Catholic groups such as the Legion of Mary and Focolare were present, as were clergy and members of religious orders with their parishioners, friends and colleagues.

Some members of the Church of Ireland were present including the Bishop of Connor, Bishop Alan Abernethy. He spoke on reconciliation in one of the workshops and expressed his joy at being welcomed as a person, and as a bishop, given the history of Northern Ireland.

He suggested that the Gospel story should not just be ‘my story’ but rather become ‘our story’.