Home > News Features > Living Church Congress in Down and Connor

Building a culture of creative co-responsibility 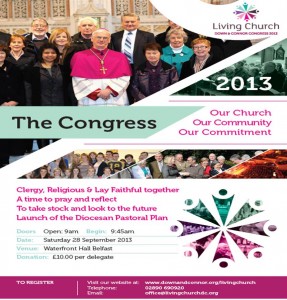 On Saturday 28 September 2013, Bishop Noel Treanor was among 1,800 people from the Diocese who came to the Waterfront Hall in Belfast to launch a pastoral plan at the Living Church Congress.

Preparation for the event and the launch of the pastoral plan involved listening to and consultation with to up to 3000 lay people, clergy and Religious in parishes, universities and group settings of all kinds.

The result is a coordinated pastoral plan, which allows space to set priorities which remain faithful to the spirit, locality and life of each parish, according to Bishop Treanor. “We want to build a culture of creative co-responsibility in our parishes and in our diocese,” he said.

On a practical level each parish will establish a parish council and a finance committee. There will be ministries and assistant ministries to support the dwindling number of priests. Parishes will activate a culture of volunteering.

All this was announced at the Living Church Congress which included a special meeting on Friday 27 September 2013 for up to 1,700 confirmation class students, and on Saturday 28 September 2013 1,800 parishioners, priests, and religious.

Celebration of Faith – The Priests

Later in the evening there was a Celebration of Faith show staring The Priests. They backed the Congress by setting aside time in their busy schedule to attend during the day and to sing at the evening event.

One of the group, Fr Eugene O’Hagan, said he put the date in his diary more than a year before. 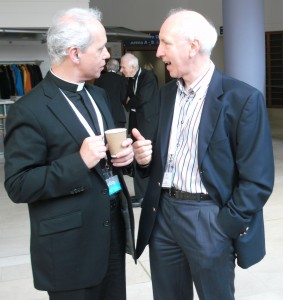 “This has been a major event in the history of the Church here in Down and Connor. There has been a lot of preparation and lots of people have been encouraged to attend and they have all stepped up to the plate. It has been very, very, invigorating it is a real sign of hope for the church,” he said.

The event was the first of its kind in the diocese and was unique with its venue, lay involvement, music and dance

“The response of so many people by attending here today indicates that we all sense both a need for an event like this and its timeliness in this 21st century when there are processes moving in our world and in our Church which are calling us to renew together our Church and our Christian faith,” Bishop Treanor said.

Congresses such as Living Church in Down and Connor come at a vital moment for the Church in Ireland according to Irish Times columnist Breda O’Brien who was keynote speaker at the event. 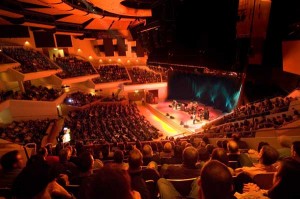 “I think there will be more and more initiatives like this. Already I have had the privilege of attending several congresses of this nature and it is not the congress itself but what happens afterwards and the people who attend and go back to their parishes with a bit of fire and enthusiasm,” she said.

She added that the message is simple – it is about the living of the Gospel in families and parishes.

For young people and teens she said involvement is key and she coined the phrase to give them the chance to “help out and to hang out together.”

She spoke of young men in a parish who got involved in a woodwork project which involved building a crib and soon learned the significance of the various parts of the crib and a lot more about their faith as well.

Some members of the Church of Ireland were present including the Bishop of Connor, the Right Rev Alan Abernathy. He spoke on reconciliation in one of the workshops, and expressed his joy at being welcomed as a person, and as a bishop given the history of Northern Ireland. 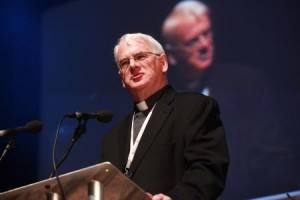 He spoke of how the gospel story should not just be ‘my story’ but rather become ‘our story’. “It has been part of my journey from early childhood growing up in that very divided and fractured community, and it is a struggle for many of us,” he said.

The Church of Ireland Connor diocese has also had its listening process and vision strategy. “It is based around engagement with culture and recognition that many churches have disconnected with our own communities and are not engaging in culture,” he said.

Down and Connor Auxiliary, Bishop Donal McKeown, said that many of the people of the congress were already very committed and working hard in their own parishes.

“After a time of difficulty and discouragement I think we have to find ways of being sources of encouragement to one another and I think the being together gives a sense of belonging, a sense of identity, and a sense of mission,” he said.

“I hope we can take Pope Francis’ message and launch out into the deep with confidence, not in ourselves, but in the grace of God working through us and working in our own situation.” 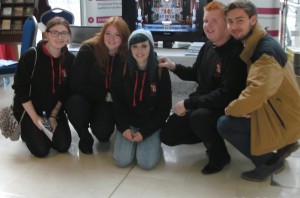 Among the many young people at the congress, the Clonard Youth group performed the opening dance. Nils Busekros from Cologne Germany was happy to be part of the group and Edel Finn spoke about how young people like activities so they love expressing the liturgy through dance.

Lay people were very much involved in the event and the Apostolate of Eucharistic Adoration group provided a quiet prayer space during the congress.

One of the group Anne Marie McNeill spoke of how hours of adoration before the Blessed Sacrament helped her and her family find peace when their daughter Fiona who suffered from a disability died in tragic circumstances. Anne Marie is also very active in the Charismatic prayer group in Randalstown.

Many members of Catholic groups such as the Legion of Mary and Focolare were present as were clergy and members of religious orders with their parishioners, friends and colleagues.

A woman from All Saints Parish in Ballymena explained, “For me one of the most positive things about today is seeing so many people here who want to be active in their parish. Many of them are already.”

A young person attending with a chaplaincy group commented, “There are so many people willing to be involved and everybody is so enthusiastic. Everybody seems to be so into their faith and wanting to learn more about their faith and then to pass it on.” 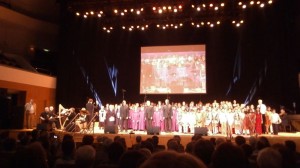 Another (smaller but public) event described as a “faith forum” will be held next year so people can continue the dialogue about issues of faith and of society in the light of faith and human experience.

A special programme will be launched in January 2014 for the young people who expect to receive the sacrament of Confirmation. 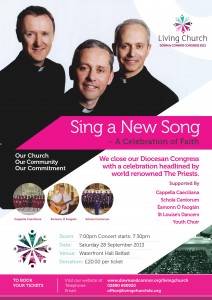