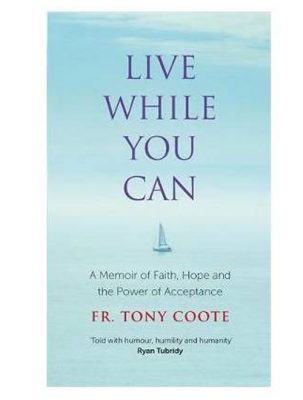 The life-affirming memoir by Fr Tony Coote, Live While You Can, which launched last week in Mount Merrion church, has sold out in many bookshops and went straight to number 1 on the non-fiction bestseller list last week when it sold 1,800 copies.

Over 2,000 people turned up for the launch of Live While You Can in Mount Merrion church on Wednesday 1 May. “A thousand copies were sold on the night. They could have sold two thousand,” Turlough O’Brien, Sales Manager with Veritas, told CatholicIreland.net. “It is a phenomenal success.”

Both Veritas in Abbey Street and other book shops such as Chapters Bookstore sold out yesterday and are taking orders for the book, which is currently being reprinted.

Live While You Can, published by Dubray/Hodder & Stoughton General Division, tells the moving story of Fr Tony Coote, who was just 53 years old in February 2018 when he was diagnosed with Motor Neurone Disease (MND). Within months he was confined to a wheelchair.

But rather than succumbing to the darkness that threatened to overwhelm him in the days after his diagnosis, he drew on his powerful faith and unwavering belief in life and found a way to light, hope and acceptance, which is personally recounted in this book. From 10 July to 6 August 2018, Fr Coote, by then in a wheelchair, led the ‘Walk while you can’ hike the length of Ireland to raise money for and awareness of Motor Neurone Disease.

The book tells Fr Tony’s story from growing up in Fairview to serving in the diocese in Ballymun and later Mount Merrion and Kilmacud to his charity work while in UCD, taking the reader through the journey of his life and showing how, through the devastating illness, he came to know the true meaning and nature of God’s love.

Speaking on the Ryan Tubridy Show on Wednesday, Fr Tony’s brother Pat described their childhood, where Fr Tony used to play at being a priest, using blocks of bound wheat in the field behind their house in the autumn time as a makeshift altar. Using a missalette, Fr Tony “said Mass for all the kids at the back of the house”.

It was no “massive surprise” then when Tony decided to go forward for the priesthood. Pat Coote described his mother’s joy, but laughingly said that, as he himself is a person without faith, he felt his brother had gone “to the dark side”.

Asked about Fr Coote’s current situation, his brother said he was now “completely disabled physically and not able to move”, although he still had some head movement and could roll his eyes “up to heaven”, which he did to good effect. He can still form some words and make sounds, continued Pat Coote.

Helping him to communicate is a printed alphabet that he keeps close by. On the back of the sheet are a number of simple, common things that he might want to ask for. “He can roll his eyes to flip the page. There is communication. All along the way, Tony has taken these opportunities on board. He’s rolling with it and getting it done.”

During the Ryan Tubridy interview, a listener rang in whose father had been diagnosed with Motor Neurone Disease a week earlier and who said she was getting strength from Fr Tony’s book and witness.