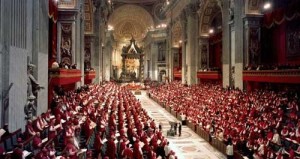 The National Centre for Liturgy in St Patrick’s College, Maynooth is to host a special celebration next week to mark the 50th anniversary of Sacrosanctum Concilium.

The event will comprise a round table discussion on 22 November on the topic ‘Constitution on the Sacred Liturgy – then and now’.

The participating speakers are:

Fr Jan Michael Joncas, a priest of the Archdiocese of St Paul, Minneapolis who serves as Artist in residence and Research Fellow in Catholic Studies at the University of Saint Thomas in Saint Paul, MN.

Bishop Harold Miller, Church of Ireland Bishop of Down and Dromore. He is chair of the Liturgical Advisory Committee, including during the time when it produced the new Book of Common Prayer and a member of the Hymnal Revision Committee.

Sr Ann Codd PVBM is an Irish Presentation Sister and the Resource Person for the Council for Pastoral Renewal and Adult Faith Development of the Irish Episcopal Conference.

Fr Peter McVerry SJ, Founder of the Peter McVerry Trust has been working with Dublin’s young homeless for more than 30 years. He has campaigned tirelessly for the rights of these young people and in 1979 he opened a hostel to address their urgent need for accommodation.

Dr Frank Lawrence is a lecturer in Early Music History at the School of Music UCD. His doctoral dissertation is a study of the oldest extant notated musical source from Ireland – a mid-twelfth century chant manuscript.

The event continues that evening with a public lecture at 7.30pm in Renehan Hall in Maynooth, where Fr Jan Michael Joncas will be the guest speaker and the response will be delivered by Julie Kavanagh, Pastoral Resource Person for the Diocese of Kildare and Leighlin.

The event concludes on Saturday 23 November with a music workshop with Fr Jan Michael Joncas from 10.00am – 3.00pm.

One of the first issues considered by the Second Vatican Council (1962-1965), and the matter that had the most immediate effect on the lives of individual Catholics, was the revision of the liturgy. The central idea was that there ought to be greater lay participation in the liturgy.

Sacrosanctum Concilium, the Constitution on the Sacred Liturgy, was approved by the assembled bishops and Pope Paul VI and published on 4 December 1963.

Sacrosanctum Concilium and all of the documents of the Second Vatican Council are available to read on www.vatican.va

Bishop Brendan Leahy of Limerick has given a reflection on Sacrosanctum Concilium – why it was such a key text then and why it remains so today – on the website of the Catholic Bishops’ Conference www.catholicbishops.ie