This year marks the 50th anniversary of Listowel Writers’ Week and, in honour of the anniversary, Ireland’s Own magazine has published a history of the event written by one of the festival’s founders, Fr J. Anthony Gaughan.

Not only was Fr Tony a member of the founding committee of what has become Ireland’s premier literary festival, he also served as festival chairman for twenty-four years. He himself has had thirty-six of his own books published, most of which are histories, some dealing with Dublin diocesan ecclesiastical history, others with local history in North Kerry and others still with individual historic figures. His body of work also includes a series on the life of The O’Rahilly, who founded the Irish Volunteers and died during the 1916 Rising.

The 88-year-old retired parish priest of Newtownpark, in Co. Dublin, credits Séamus Wilmot, who was registrar of the National University of Ireland and a director of the Abbey Theatre, and Tim Danaher, an RTE radio play producer, with first mooting the idea of a literary festival. Others on the founding committee were: John B Keane, Bryan McMahon, Luaí Ó Murchú, Michael O’Connor and Nora Relihan.

In its early years the festival struggled, but it has thrived thanks to sponsorship from the Kerry Group, says Fr Tony. “An interesting thing is that the Writer’s Week and the Kerry Group were founded in the same month 50 years ago, with the Kerry Group’s first building being constructed in the Canon’s Field, a small bit of land that was owned by the parish priest of Listowel!

“Thanks to their sponsorship, we have a €35,000 prize fund for awards including the Kerry Group Novel of the Year award, which is worth €15,000. Their sponsorship means that we can also bring big international names to Listowel.” 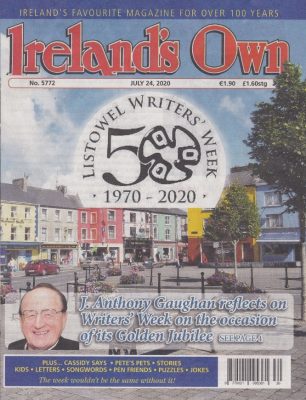 Separately, there is also a €12,000 poetry prize sponsored by Listowel-native, Mark Pigott, who is executive chairman of the truck manufacturing conglomorate PACCAR Inc.

Regrettably, because of the coronavirus pandemic, Listowel Writers Week could not take place as scheduled in May this year, but an online prize-giving ceremony took place on Wednesday 27 May, with Edna O’Brien winning the Irish Novel of the Year award for Girl and Miriam Gamble winning the poetry prise for her collection What Planet.

“Hopefully, we will be able to hold the festival as normal, next May, in what will be Writers’ Week’s 51st year,” said Fr Gaughan.

Personally, the clerical author has got much out of Writers’ Week over the years, getting advice from well-known authors and sharing his experience with those attempting to get their work published. At present, Writers’ Week is running a competition, in conjunction with the An Post Irish Book Awards to find ‘Poem of the Year’. Entries are open until Friday 4 September and can be made here.