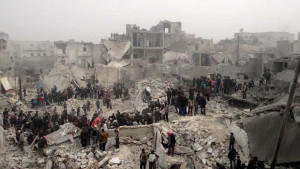 The President of the Vatican’s Pontifical Council for Interreligious Dialogue has challenged religious leaders to be at the forefront of efforts to promote peace in their societies.

On Monday, Cardinal Jean Louis Tauran also expressed solidarity with the people of Syria who, he said, were suffering “seemingly limitless violence”.

In his address to a seminar at Petra University in the Jordanian capital Amman, the Cardinal said religions have “an important role to play in bringing hearts and minds closer together.”

Elsewhere in his talk, ‘Religion, society and violence: causes and results. The role of religious leaders for peace and social cohesion,’ the President of the Pontifical Council for Interreligious Dialogue said that though “collective responsibility” for a peaceful society lies “in the hands of political and economic key players, each one of us must remember that freedom is based on fraternity and equality” and we must work towards this goal every day.

History, the Cardinal stressed, remembers public forms of violence such as armed conflicts and large public demonstrations, but less memorable are the “private forms of violence” which very often are “the first cause of violence.”

The violent person, he continued, is weak, “no longer capable of using his reason or his heart.”

“Violence is not courage,” he stressed, but “the explosion of a blind energy that degrades the person who gives in to it” and “it is the most perverse when it occurs in the name of God.”

In this situation, religious leaders must work to promote a “pedagogy of peace” and be outspoken in their condemnation of terrorism and injustices.

They should “seek the truth of persons and situations” to favour real justice, and teach pluralism as “a source of mutual enrichment.”

Religious leaders should also teach methods “which lead to justice and freedom” through rational, loyal and lasting negotiations” and “make more obvious” the concept that “forgiveness and reconciliation open the way to the purification of memory.”

Christians, Cardinal Tauran noted, are called “to go beyond all forms of violence” and to be witnesses of gentleness and peace.

The Cardinal admitted that not all religions adopt the same positions regarding just war, legitimate defence and jihad, “but generally, they are all in agreement that peace is a value to be respected and promoted.”

Violence, he affirmed, “is never the adequate response to forms of injustice.”

Friendship and “respect for divergences and convergences,” the Cardinal said, “are the only means for avoiding destruction and death” and will lead to a world of justice and solidarity.

Cardinal Tauran is in Jordan together with the Apostolic Nuncio Archbishop Giorgio Lingua and the Secretary of the Pontifical Council for Interreligious Dialogue, Fr Miguel Ayuso, and Mgr Khaled Akasheh, responsible for the dicastery’s relations with Islam.

This week they are due to participate in a seminar jointly organised with the Royal Institute for Interfaith Studies in Amman, representing the Catholic and Muslim points of view on “confronting current challenges through education.”