Knock Shrine has announced its official list of speakers for this year’s National Novena which will focus on faith and the family.

The Archbishop of New York, Cardinal Timothy Dolan, is a keynote speaker and will address pilgrims on this theme on 14 August opening the novena.

The Primate of All Ireland, Archbishop Eamon Martin, will follow next day with an address entitled, ‘You are a Consecrated Nation, a People set Apart’.

Other speakers include Archbishop Michael Neary, Bishop Kevin Doran of Elphin, Harry Casey and Fr Peter Murphy of Accord, as well as Peter Sutherland, UN Special representative on international migration and Joan Freeman of Pieta House.

A number of workshops will also take place in tandem with these keynote addresses and will offer advice from groups such as Knock Counselling Centre on family life.

Kate Liffey, Coordinator of the National Faith Development Team, will talk about ‘What the Family Teaches us about Faith’. 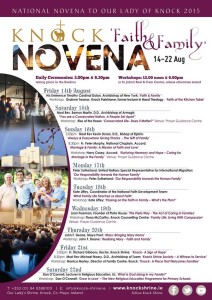 This year’s national novena will see the first diocesan pilgrimage from New York bring up to 200 pilgrims from the US for a week-long visit.

The transatlantic pilgrimage flight from JFK Airport will include Cardinal Dolan.

The arriving pilgrims will participate in the annual nine-day Knock novena in honour of Our Lady which attracts thousands to the national shrine every August.

In what the airport hopes will become a regular service, the Aer Lingus flight will depart New York on Saturday 8 August and return on 16 August.

This new development for the airport and the shrine was announced by Fr Richard Gibbons, parish priest of Knock and comes as a major redevelopment of Knock Shrine continues.

There are plans to update the 38-year-old basilica while greater efforts are undertaken to promote the shrine among potential visitors from Europe and America.

Around 1.6m people visit the shrine every year.

The idea of a special pilgrimage flight to Knock was first mooted two years ago by Fr Gibbons during a visit to New York for St Patrick’s Day in a meeting with Cardinal Dolan.

There are an estimated 2.8 million Catholics living in New York City.