Line up for third Faith and Life Convention announced 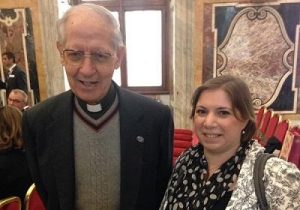 Details have been announced for the third annual Faith and Life Convention which takes place in the diocese of Down and Connor at the end of September.

This year’s keynote speaker is Sarah Teather of the Jesuit Refugee Service.

She will reflect on the current refugee crisis and share her own journey of discernment which led her away from the benches in the Houses of Parliament in London to her current role.

In January 2016, Sarah Teather took up her role as Director of Jesuit Refugee Service (JRS) in the UK.

She joined the JRS UK team from JRS International – work that took her all over the world, visiting projects in the Middle East, East Africa and in key pressure points in Europe like Greece-Macedonia border and Southern Italy where refugees attempt dangerous crossings over the Mediterranean.

Prior to joining JRS, Sarah Teather served as a Member of Parliament for twelve years in inner London, where she took a particular interest in social justice and human rights issues, founding the All Party Parliamentary Group (APPG) on Guantanamo Bay, and chairing the APPG on refugees.

Initially elected as the youngest MP in Britain, she went on to hold office as Minister of State for Children and Families, where she had responsibility for tackling child poverty, supporting children with special educational needs, and negotiated the end of detention of children in the immigration system.

In the context of doing the Spiritual Exercises of St Ignatius on a 30-day retreat she decided to leave parliament but taking her passion for the poor and an assurance that working with refugees through the JRS is how she wants to serve God.

The third Faith and Life Convention takes place on Saturday 24 September 2016 in Our Lady and St Patrick’s College, Knock, Belfast beginning at 10am. During the course of the day, Bishop Noel Treanor will address participants.

According to organisers, this year’s conference discussion will pick up on a range of current topics, reflecting on how the Church and people of faith position themselves in current debates and engage more readily in the public square.

An essential element of the day will be the afternoon workshops which will explore the place of faith in many different areas of peoples’ lives.

Each participant can attend two workshops which include:

Faith & the Public Square given by Fr Tim Bartlett, the Episcopal Vicar for Education and the Diocesan Director of Public and Social Affairs in Down and Connor. As society changes and becomes increasingly secular it can leave those who hold to a Christian position feeling decidedly uncomfortable and marginalised. This workshop, with the help of some local politicians, will explore the challenges facing Christians in the public square and how the rights and freedoms of people of faith can be more effectively accommodated, in collaboration with all citizens,for the common good.

Caring for the unborn given by Mary Lewis & Brett Lockhart. The people of Northern Ireland are often told that they are behind the times because they have not introduced the 1967 abortion act. The workshop will explore how people of Faith can value and care for the unborn child and their parents and contribute to a better society. Mary Lewis of LIFE NI is a barrister who has spent many years promoting the idea of supporting both mothers and babies in crisis pregnancies. Brett Lockhart is a husband, father of four and sons and is currently training for the permanent diaconate.

Unity in Diversity is given by Rev Ruth Patterson OBE, a Presbyterian Minister and the director of the charity Restoration Ministries. Ecumenism is a tired, dated word. Reconciliation is viewed with suspicion in certain quarters. Yet as people of faith we are called to unity. The workshop explores how we can respond.

Faith and our Divided Society given by Dr John Kyle, a GP and councillor on Belfast City Council. An Evangelical Christian, he is also a member of the Progressive Unionist Party and was interim party leader for a short period in 2010. In our society Unionists and Nationalists, Catholics and Protestants can live and work side by side without really meeting or coming to understand each other. A person from the Protestant Unionist community will give some of his perspectives and facilitate a conversation.

Moved to Mercy is given by Maria Garvey, founder of the L’Arche Community in Belfast and leader of L’Arche on the island of Ireland, who now leads ‘Kridyom’, an association of dedicated professionals working together to empower people, nurture communities and transform lives. Maria is deeply committed to every single person having a place to belong where they can flourish and shine. She is experienced in spiritual accompaniment and in leading retreats and workshops both nationally and internationally.

Through scripture, current affairs and personal stories, the workshop explores the ‘Spirituality of Falling Down’ and the different ways in which people encounter Mercy in their own lives. It will consider the possibility that it is our fragility, not our strength that generates compassion in our world and that human vulnerability is the home of Diving Mercy.

The workshop will encourage and challenge us as a church to think about how we welcome our most vulnerable members, not from a place of tolerance or charity but as the cornerstones of Love, Joy and Mercy upon which we build true belonging and community.