Irish nun who removed IS flag in social cohesion call 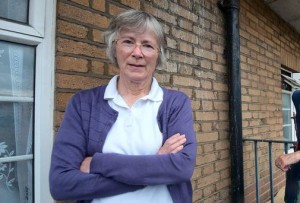 Limerick nun Sr Christine Frost who helped remove an IS flag in the East end of London last month has warned that social cohesion must be fostered otherwise Britain faces the prospect of a Bosnia/Serbia situation.

The 77-year-old twice removed the banner linked with the Islamic State from the entrance to a disadvantaged housing estate in Poplar, East London.

In an interview with ‘The Spectator’ reported by the Irish Independent, Sr Christine explained that she has tried to highlight the social deprivation and sense of grievance that pushes Muslim youth in her area into the arms of extremists.

She said her actions had been presented as trying to set one faith against another but that had never been her intention.

The nun, who is a member of the Faithful Companions of Jesus, said she is prepared to defend her own Christian faith when she sees fit and that it was the hate-filled connotations of the black flag that upset her.

Sr Christine herself lives in a flat on the estate and chairs its residents’ association. She explained that local youths in the area are mainly of Bengali origin and have not been radicalised.

But some activists had taken advantage of the situation in Gaza to stir up division.

The nun has been awarded an MBE for her community housing and education work in the mostly Muslim area.

In a recent interview with the international catholic weekly, The Tablet, she called for extra funding to help with training and employment for the area’s young men.

She also believes that with care and attention she can persuade young Muslims to reject Jihad and embrace life in Britain.

“We must find a way of bringing people together,” she says. “We must create cohesion, or we will have a Bosnia/Serbia situation.”

Sr Christine left her convent school at the age of 17 and qualified to study physiotherapy but instead chose to become a nun.

“My parents wanted me to do the medical course, but I had a personal conviction,” she said.

Speaking to the Spectator/Irish Independent she said she is angry that many poorer residents in the East End, including Muslims, are being pushed out by a “new gentry” who work in the financial services centre at nearby Canary Wharf.

“I want the wealthy people who have millions and live in Canary Wharf to come over here and help the young people, get them into training. Make that an attractive alternative for them.”

She said many Muslims have a persecution complex, linked with Tony Blair’s invasion of Iraq and, more recently, Israeli attacks on Gaza.