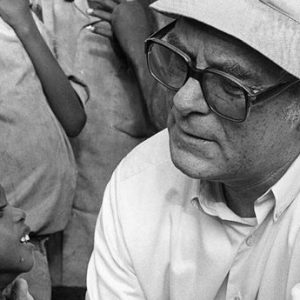 Fr Jack founded Concern with his brother Fr Aengus Finucane, who was also a Spiritan father, in the wake of the Biafran war in the late 1960s.

The charity, originally called Africa Concern, started with a ‘Send One Ship’ campaign that saw a vessel, the Colmcille, transport badly needed food supplies and medicine to the coast of Biafra, which was seeking independence from Nigeria, in September 1968.

Two years later it was involved in a campaign to send relief to the victims of a devastating cyclone in East Pakistan, now Bangladesh.

Today, Concern has 3,200 staff of 50 nationalities working in 26 countries around the world, helping nearly nine million people a year.

Literally millions of people around the world are alive today, and enjoying better living conditions, thanks to the work of Frs Jack and Aengus Finucane and the hundreds of Concern workers and volunteers who were inspired by their example.

In a personal tribute, Bishop Brendan Leahy of Limerick said: “Father Jack’s work and achievements with his brother, the late Father Aengus Finucane CSSp, and others with Concern, the international humanitarian organisation, were remarkable in any context, helping to bring it from a small organisation into a global force that today represents the triumphs of the human spirit in how it helps the poorest people right across the world.

“Despite leaving Limerick at the age of 18, Limerick never left him. He remained at all times in touch with what was going on here, not least on the sporting front.”

Indeed, Father Jack was, like many in the Treaty City, a great lover of the sport of rugby, and on Wednesday morning, the day he died suddenly, he watched the British and Irish Lions play against the Auckland Blues.

But while Father Jack liked watching his sporting heroes, he was a real-life hero in his own right, said Bishop Leahy. “Father Jack will forever be a symbol of selflessness, caring and hope and he leaves an inspirational legacy, on a par with the great humanitarians of our nation.

“In life there are many people placed on pedestals, people we consider heroes, and rightly so. We all need people to look up to. But it is no exaggeration to say that Father Jack Finucane was the embodiment of what it means to be a hero: someone who protects and defends.

“In his deeds, he was a hero in that he dedicated his life to protecting and defending the weakest people on our planet. There is no greater Christian calling, and he took it up selflessly and courageously, often putting his safety at great risk but also completely indifferent to that risk.

“It is also heart-warming today to hear of just how proud he was of being a priest. He had a calling and answered it. Not just that, he fulfilled everything possible that could be expected of one man or woman’s calling. A beautiful characteristic also was that, by all accounts, he was extremely modest, never seeking attention for, or boasting about, his very considerable achievements.

“As Bishop of Limerick, I am proud to say that Father Jack exemplifies the very best of what Limerick offers, and has committed his life and ministry to serve the good people of the Church and the work they are doing throughout the world.”

Meanwhile, Fr Jack’s legacy continues. Concern Worldwide is currently in the midst of an emergency campaign to bring relief to the thousands of people suffering the effects of famine in east Africa.